Let's not be throwing shapes on issue of Irish unity

Confederal model is only viable approach in North for foreseeable future 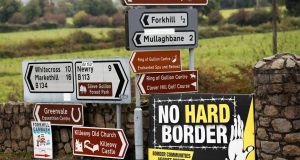 “The people of the Republic simply will not vote for any form of Irish unity in which the unionist and loyalist people of the North are dragged against their wishes into an all-Ireland republic by an Anschluss plebiscite.” Photograph: Javier Etxezarreta EPA

Having a border poll in the next five years is simply pointless. For starters, the precondition for having such a poll – namely that the northern secretary be of the opinion that there may be a majority in favour of Irish unity – simply is not satisfied and is very unlikely to be satisfied within that time period. All the indications are that a poll held during that period would reject Irish unity.

More fundamentally, the very issue of what Irish unity would mean to voters in such a poll has yet to be settled. Northern voters will not vote for a vague concept. The UK Brexit referendum showed us how futile it is to vote for concepts in total ignorance of the concrete reality that flows from such concepts.

If we haven’t yet settled even on the outline of a feasible form of Irish unity, we aren’t even remotely in a position to plan for such a poll.

There are two broad models for Irish unity. One is a unitary sovereign state with a single constitution, legislature, legal system and international status. The other is a confederal Ireland in which the two jurisdictions would share some sovereign powers, including international relations and membership of the European Union.

The confederal model is the only one with a ghost’s chance of majority support in Northern Ireland for the foreseeable future and it probably would not have majority support in the next 10 years. It is the only model in which the need for accommodating the British identity of unionists would have tangible meaning. The North could even retain a Canadian-type link to the crown.

Sinn Féin is setting the holding of such a poll as a red-line issue for its participation in any Dublin government. Well, that’s fine. It will not happen.

Setting up a third forum to discuss Irish unity in Dublin which unionists and loyalists will simply not attend is no answer to the obvious fact that nationalist Ireland cannot impose unity on unionist Ireland.

What might be very worthwhile is for a consensus to emerge among political parties in the Republic that the form of unity to which we aspire is a confederal rather than a unitary state. That would not suit Sinn Féin, even if Mary Lou McDonald has said that she is open to considering a confederal form of unity.

If that consensus emerged south of the Border, it could feed into a transformation of attitudes north of the Border – an end to the unionist fear of absorption into an alien state.

More important, such an understanding of the southern ambition for unity could assist in the process of reconciliation between orange and green in the North.

The demographic transformation happening in Northern Ireland has the potential to fundamentally change the way in which the two major traditions there view each other.

We need reconciliation and normality based on mutual respect and understanding. We also need prosperity

In the age cohort of 60-plus, however, Catholics are outnumbered by more than two to one.

The two communities are coming into numerical balance. But that does not mean for a minute that those of voting age are majority Catholic. Still less does it mean that all Catholics would vote for Irish unity even if such a border poll were held in the next 10 years.

Sinn Féin may call for border polls and forums. They do that to placate their more militant base. They don’t care if such politics increases polarisation in the North. Polarised politics suits their agenda. They despise centre-ground politics and politicians. They are not emotionally committed to power-sharing or reconciliation. Their political strategy thrives on crisis and impasse – as long as they are in the thick of it. And that lack of emotional commitment to power-sharing and reconciliation is more than matched in the ranks of the DUP.

We need reconciliation and normality based on mutual respect and understanding. We also need prosperity. That takes time, patience and statecraft – not facile posturing and shape-throwing.

1 Donald Trump is in trouble, and that could spell very bad news
2 Tyrone midwife on the cover of Vogue magazine
3 ‘White Irish people have never had to think about this’
4 Pubs reopening will not mean ‘fellas having a few pints and peanuts’, Holohan warns
5 ‘Summer is not lost’ - Taoiseach announces accelerated easing of coronavirus restrictions
Real news has value SUBSCRIBE