Michael McDowell: We are sleepwalking into the hands of democratic centralism 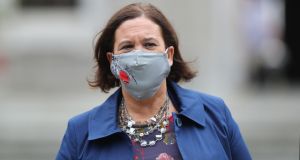 Mary Lou McDonald, Sinn Féin president: Why did Bobby Storey merit a massive regulation-busting public funeral in Belfast? Because he was a leading member of that unelected politburo based in Belfast. Photograph Nick Bradshaw

There is a problem with the failure of the Irish media to examine carefully and inform the people about the true nature of Sinn Féin.

The problem may be that Irish journalism was, and still is to a lesser extent, heavily populated by former hard left thinkers and commentators who are squeamish about their own past flirtations with organisations that embraced the Marxist concept of what is termed “democratic centralism”.

In case I am misunderstood, I am not suggesting a McCarthy-ite purge of the print and broadcast media. I am only offering my own view of how, with a few honourable media exceptions, the public are being kept in the dark about the true nature of Sinn Féin and the true implications of its espousal of democratic centralism.

There is something ludicrous about the current process in which Brian Stanley is given the condign punishment of taking a week off active politics to be followed by a personal statement to the Dáil – especially when his statement will be carefully composed and approved by the lads back in the Connolly Club in Belfast. His underlying views on the killing of 18 paras at Warrenpoint are exactly the same as those of the vast majority in the Provisional movement.

Why did the unelected Bobby Storey merit a massive regulation-busting public funeral in Belfast?

As Jennifer Bray reported here last Friday, the visit by a senior Sinn Féin organiser in Meath to the home of Christine O’Mahony intent on having her take down her tweeted criticism of an online remark by Stanley about Leo Varadkar was explained by the party’s adherence to the rule of democratic centralism – the doctrine espoused by Lenin in his seminal communist work What Is To Be Done? published in 1902.

All debate must be internal; party members must adhere in public to the party line once decided.

Nor is that uniformity demanded only of junior party members such as Ms O’Mahony.

Francie Molloy, then an elected mayor and now a Sinn Féin Westminster MP, was famously the subject of humiliating instant suspension from the party for daring to publicly disagree with the Adams-McGuinness espousal of a local government reform in the North for seven super-councils instead of 26 district councils.

When readmitted by a party disciplinary committee, Molloy issued a statement referring to the “difficult time” he had endured and how he had felt “isolated” from colleagues. He declined to comment on whether he had changed his mind on local government reform.

But the Leninist system of control runs far deeper and far more dangerously. The recent Cash for Ash inquiry revealed that Sinn Féin ministers in Stormont take direction from an unelected politburo of party officers.

Colm Keena and Gerry Moriarty have bravely attempted in their published articles in this newspaper to spell out the real nature of the northern politburo’s control and discipline of the Sinn Féin party including its elected members, North and South.

This is no more a conventional political party than was Lenin’s. Its elected members – including Mary Lou McDonald and Michelle O’Neill – are largely the glove-puppets of an unelected politburo centred on Belfast. Search your brain to remember the selection process for Michelle O’Neill.

Why did the unelected Bobby Storey merit a massive regulation-busting public funeral in Belfast? Because he was a leading member of that unelected politburo. It wasn’t because of his massive involvement in criminality before and after the Good Friday Agreement or his frequent attendance at Leinster House in later years.

Sinn Féin is currently on course to becoming the largest coalition party in the next government south of the Border. Quite apart from the politburo’s internal control of the party, it will quite likely be in a position to extend that sinister control to the selection of senior gardaí, of the judiciary, of the board of RTÉ, and of the Broadcasting Authority. Will we have Bobby Storey’s face on our postage stamps?

If it dominates the next cabinet, is there any reason to suppose that it will not do what it has happily done in Stormont – subjugate senior ministers to de facto control by unelected outside advisors housed in the Connolly Club in West Belfast?

In Leinster House, Sinn Féin’s elected TDs and senators have no say as to who works in their private office. They get scripts handed to them for unquestioning delivery. They never – I repeat never – publicly express reservations about, or dissent from, the party line. Independence of mind is met with deselection. Look at the fates of Carol Nolan and Peadar Tóibín.

Sinn Féin has never accorded any of its representatives a free vote on any matter of private conscience.

If Ireland is governed by a party controlled by cadres who knock on doors to extract obedience from naïve members to the demands of democratic centralism, what exactly will be the future of Irish democracy in the very short term?

If things go on as they are, liberal democratic politics may go the way in Ireland that they are going in Hungary, Poland and elsewhere.

We are sleepwalking into the hands of the democratic centralists.