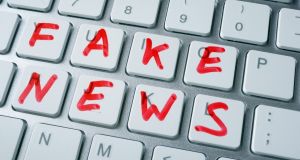 We must place all ethical issues on the limits for published content within a single media council, through which newspapers, online publications, broadcast news, online news and social media platforms could be subject to one broad ethical code.

Online and social media have transformed the media landscape and the old distinctions between its various platforms have become impossible to maintain.

Hugely pervasive and powerful, social media’s role has also exposed core regulatory issues, notably what limits should be set by society on harmful material, and who should enforce them.

The establishment of the Press Council back in 2008 was not exactly auspicious. At the launch the minister, the late Brian Lenihan, threatened a privacy law if the council did not prove it was effective in defending the right of privacy from unwarranted media intrusion. Twelve years later, it might be time to see if that same council’s remit might be extended and its model used to self-regulate more than the print media and a few online-only publications.

The world of 2008, when the council was established to provide redress to the public from newspapers overstepping the mark or to protect their good name, was so very different. Then the fear was privacy and defamation, today it is also fake news, misinformation and threats to privacy coming from bots and algorithms.

While newspapers are becoming broadcasters, producing videos and podcasts, broadcasters are increasingly producing text-based journalism online in blogs and other formats. In between, there is the growing number of online-only publications that are neither newspapers nor broadcasters.

Furthermore, it is impossible to maintain the insistence, still proclaimed by social media organisations, that they are not “publishers” with the same moral, ethical and legal obligations to consumers as print publishers.

The ad hoc regulatory system in Ireland is way out of date and reflects a time when the distinction between print and broadcasting was clear to all. Now the programme for government has promised to expand the remit of the Public Service Broadcasting Commission into a Future of Media Commission which is to report broadly on “the future of print, broadcast and online media in a platform-agnostic fashion”. It should address and bring coherence, common standards and a common framework to this regulatory mess.

The Press Council offers a voluntary regime, not controlled by the State or the industry, for those newspapers that choose to join – which is all – and for many online-only news platforms. But even when the Press Council was established it was already an anomaly, based as it was on much older models in Nordic countries, some going back 200 years.

Social media platforms are being encouraged internationally to self-police through voluntary codes of conduct but face possible further legislative controls if shown to be unwilling to act effectively.

The result is an unfair playing field between competing commercial organisations with, for example, far more onerous obligations on newspapers

The BAI has a number of hugely important responsibilities, which it should retain. It grants broadcast licences, it has codes governing advertising and children’s content and it disperses the Sound and Vision fund. It also has responsibility for media competition policy. All in all, the BAI has a huge amount on its plate so it might even welcome a new voluntary system of content regulation.

The result of the regulatory mess, a system created ad hoc for different times and technologies, is the imposition of a variety of differing and inconsistent levels of obligations and standards on media organisations and journalists – in some cases on the same journalists working for the same organisation on different platforms, like those on the broadcast and online platforms in RTÉ.

In other cases, the result is an unfair playing field between competing commercial organisations with, for example, far more onerous obligations on newspapers in the area of defamation than on social media platforms.

What is urgently needed is a common and consistent framework. A more coherent and fairer system might be, we suggest, to place all ethical issues on the limits for published content within a single media council, through which newspapers, online publications, broadcast news, online news and social media platforms could be subject to one broad ethical code – with one body charged with monitoring the code.

Such a media council with its own ombudsman, directed by a council representing civil society and media representatives, could hear complaints from the public, have a speedy, free, system of address, and provide adjudication and redress to those aggrieved.

It might also be charged with expanding and protecting press freedom, be involved in news literacy, and produce guidelines for specific issues, such as coverage of a major trial that has caught the public imagination or an election.

Provision for the Press Council is already part of the Defamation Act and legislation for a new media council could be incorporated relatively straightforwardly in the long-promised reform of the Act.

Such an expanded council would be rooted above all in a defence of free speech, inevitably sometimes shocking or even “offensive”, but would seek to ensure publishers/broadcasters within the State are expected to adhere to the same basic standards of truth and fairness.