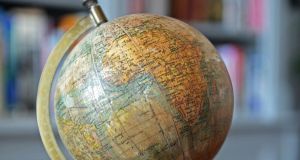 I have always taken my ability to go home for granted. Get in the car and drive to Fishguard. Or just head to Heathrow and jump on a plane. Photograph: Eric Luke

The sky looks so much like an azure ocean that I half-expect fish to appear, jumping across the endless vivid blue. It is the blue of a Provencal afternoon with not a puff of air and the temperature climbing into the 90s. All around is the deep green of the vineyards and, to borrow a favourite phrase from F Scott Fitzgerald, I am confronted with something commensurate to my capacity for wonder. It is the summer of rural French cliche. Better men than I have made good livings out of less material in the hills of Provence.

Days are easy here. I accept the imperatives of the sun. Early walking with the dog in the cool green of the vineyards, then retreat to rooms with stone floors and wide open windows. By early afternoon, man and beast are too stunned by the heat to move. There will be time in the long twilight to swim in the nearby river and watch the dog trying to catch darting fish below the waterfall. He fails but keeps trying, failing better each time.

So far so glorious. And yet . . . I have never felt such a longing for home. I would give all the sunlight and warmth here now just to plunge my head into the bracing cold of the waves at Goat Island. Right now my ancestral home on the west Waterford coast has never seemed so far away. As I write family members are messaging each other about plans for meetings on far away beaches. I can see from my weather app that it is raining in Ardmore as I write but with sunshine and clouds promised for later. They will take every second of the light to hoard against the grim winter to come.

For the first time in my life I cannot be there in August for the gathering of the Hassett clan in Ardmore. The Covid-19 restrictions would have meant a two-week quarantine, a large chunk of annual leave spent sitting confined in a tiny cottage for 14 days. By the time I could emerge, my loved ones would have dispersed once more.

My first exposure to this part of Ireland was at six months of age and I have been drawn back ever since, a familial tie that goes back to my great grandfather who was a sergeant in the Royal Irish Constabulary here. His son Paddy, my grandfather, lived his early years in Ardmore and subsequently built a cottage overlooking Goat Island where his children spent their childhood summers. Other branches of the Hassetts have roots here too.

I don’t disagree with the quarantine rules. They exist for the common good

In a frequently peripatetic life, the village and its hinterland have connected me to friendship and love, immutable and intimately connected to certain people in a certain place. There is also the great joy of excursions across Munster to my father’s people in north Kerry and seaweed baths and ham sandwiches in Ballybunion and long walks by the river Feale, and the lure of the Iveragh peninsula and the O’Connor cousins in Cahirciveen. The laughter among my Kerry cousins, their immense sense of the comic possibilities of everyday life, the fierce loyalty to one another, are things I love.

I don’t disagree with the quarantine rules. They exist for the common good. My 85-year-old mother is among thousands of elderly people who need protecting from the ravages of the pandemic. She bore the strictures of cocooning with fortitude and good humour. Yet I know that at her age she cherishes each summer with her children and grandchildren. Driving past the empty cottage where I would normally be ensconced she feels the pang of loss.

I have always taken my ability to go home for granted. Get in the car and drive to Fishguard. Or just head to Heathrow and jump on a plane. There was a comfort in this closeness. I was connected to family and friends and places. The pandemic has changed that with an unsettling force. The psychological meaning of being part of a diaspora is changing. The longer the pandemic lasts the more it feels like exile. We who once came home to welcomes, whose coming was as natural as the return of seasonal birds, are now seen as potential hosts of a fatal pestilence. That is a disturbing truth to live with.

It forces questions about where I really belong as I face into late middle age. Suppose there is no vaccine for years? Then what and where? My children miss their cousins and wonder already about Christmas. Growing up in London, the Ireland they know from holidays is an escape from the confined spaces of the big city.

I doubt there is much we can do in the absence of a vaccine. I avidly follow the news of each advance and setback. When I hear talk of stricter restrictions returning I console myself that Ardmore and Kerry have always been there and always will be there. They are within me even if I cannot place my feet on the ground of my own people. Greetings from Provence and wishing I could be with with you.