Irish is a language of the sympathetic middle class 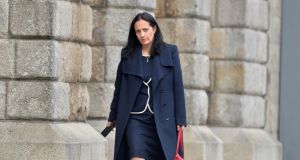 Minister for the Gaeltacht Catherine Martin: The State may encourage rhetorical flourishes about the cultural importance of Irish, but it has grown weary about its social dimension. Photograph: Alan Betson

The recent shuffling around of the Gaeltacht sub-ministry is emblematic of the State’s political relationship with Irish – an inconsequential afterthought. We are now seeing more clearly how language politics in Ireland is evading the social reality of Irish.

Current policy may superficially boast a sense of cultural renewal, but the language’s native-speaking community is in crisis. The decrease in the density of active Irish speakers in the Gaeltacht has undermined the ability of the community to regenerate itself.

Irish can be generally characterised by three features: a dwindling and alienated native-speaking group; an official pretence of notionally supporting Irish while ignoring the decline of its community of speakers, as highlighted in the recently published annual report of the language commissioner; and a level of public indifference to the vague approach to language promotion which is dissociated from the social continuity of Irish.

Arriving at this sorry state 10 years on from the adoption of the 20-year strategy for the Irish language can be partly explained by the preference in current approaches for the symbolic and institutional use of Irish. There is no expectation that policies would have any application in actual communities. The State may still encourage rhetorical flourishes about the cultural importance of Irish, but it has grown weary about its social dimension. The primary purpose of current policies is the containment of language promotion as an official concern.

The State has accepted the findings of a series of research reports since 2007, but has largely rejected those recommendations aimed at protecting Irish-speaking communities. This inconsistency has effectively barred any possibility of a comprehensive approach to challenging sociolinguistic issues.

For example, the language planning committees and their operations in the Gaeltacht, being largely based on laudable voluntary efforts, are neither equipped nor empowered to engage with the social processes causing the crisis. Their concentration on the organisation of standalone local events is inevitably detached from social reality.

This raises the question: why did the State decide to introduce this policy framework when there was no public demand for it, and no published research recommending its overall approach? Who advised the State to take this course of action?

Irish is now governed by an ideology we could refer to as “staged Irish”. This ideology is a rootless variant of a cultural identity suited to those of us who are unperturbed about the loss of vibrant Gaelic communities. The approach stemming from this perspective has three ongoing consequences: the Gaels are being disembedded from their social context via the individualisation of Gaelic identity; the destruction of the remaining Irish-speaking Gaeltacht is disregarded; and Irish is being decoupled from the cultural roots of the Gaelic group and from communal and cultural agency among the Gaels.

Staged Irish prospers by only requiring an individual cultural affiliation with Irish. In this emerging context, Irish obviously no longer requires a homeland, cultural reinforcement in a community or collective agency for the Gaels.

Irish is now expected to prosper via a diffuse fusion of enthused individuals receiving rewards and encouragement by performing Irish in supportive institutional settings, such as schools, academia, the arts, the media and limited symbolic civic practice – Irish for the State’s sympathetic middle class.

The individualist logic underpinning Staged Irish, now decoupled from the Gaeltacht collective, is unashamedly neo-liberal. To this extent, the current approach represents a takeover by non-native Irish speakers in a post-communal and post-Gaelic context. Gaeltacht identity is now to be culturally repopulated by individuals who have acquired Irish as a secondary language.

This wizardry in policy realignment transforms the impending societal collapse of the Gaelic collective into a victory for Staged Irish individualism. It creates an administrative mechanism by which the official policy can outlive the actual speaker group. The process of language loss is being rebranded as a posthumous triumph.

Retreating from this neo-liberal folly is not going to be easy. The 20-year strategy is now both irrelevant and inapplicable half-way through its term – resulting from its inbuilt obsolescence. This deliberate State ineptitude regarding the Gaeltacht crisis allows further decline in the Irish-speaking group. In this vacuum, the use of English continues to increase, denying future generations the opportunity to speak Irish. A first step out of this untenable situation would be to put the evidence-based recommendations back on the policy agenda. This would be more beneficial to the Gaels and the Irish language than expecting people to engage with the illusion of renewal typified by the current approach.

1 Miriam Lord: Let’s call a spad a spad – this Government has woeful timing
2 Ellen DeGeneres apology: Why do her words sound hollow?
3 Further restrictions expected for Dublin if Covid-19 infection rate does not stablilise
4 Let coronavirus spread through under-60 population, Dáil committee told
5 Ireland’s top earners ‘do not see themselves as rich’, study finds
Real news has value SUBSCRIBE