As with every supposedly immutable law, secession for every group that lays claim to nationhood does not fit every circumstance 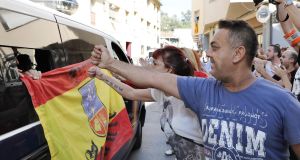 Most of today’s nations emerged from the dissolution of empires. Nationalisms now threaten the dissolution of states. The independence movement in Catalonia represents a collision between what looks like a reasonable demand for national self-determination and the fact of Spanish state sovereignty. Convenient though it would be to pretend otherwise, there is right on both sides.

One danger – perhaps the biggest single threat to democratic institutions – is the rising belief that such disputes can be settled by a simple popular vote. If a majority of Catalans, or any other national group for that matter, back independence in a referendum the popular will must prevail. Plebiscites are thus elevated as the purest form of democracy.

History records they are more often a route to authoritarianism – a device of demagogues and dictators as Margaret Thatcher once put it. Liberty rests on the rule of law, democracy on safeguards for minorities. States cannot be forever at the mercy of fragmentation. These are not things to be overturned by popular whim.

That is why we have constitutions, written or unwritten, to enshrine basic freedoms in a contract between citizen and state. And that is why embedded in such constitutions are rules for amendment that demand more than 50 per cent plus one at a single point in time. There are good reasons for the German federal republic’s disavowal of national referendums.

Former US president Woodrow Wilson is generally held to have made self-determination a ruling principle of international relations. His “14 points” speech at the close of the first World War became a sacred text for those seeking self-rule. Wilson called for sovereignty for the nations of the Ottoman Empire, guarantees for the Balkans and a state for the Poles. Elsewhere borders should be aligned more closely to ethnicities.

A particular set of proposals framed to fit a particular set of circumstances – the US was self-interestedly selective in redrawing the map – was etched in tablets of stone. As it happens, the famous phrase does not appear in the 14 points. But the world was entering the age of decolonisation and it seemed as good a principle as any for the era of nations.

As with every supposedly immutable law, secession for every group that lays claim to nationhood does not fit every circumstance. Wilson set as a counterpoint a promise that the new League of Nations would underwrite the sovereignty of states. The tension persists, with the UN now burdened with the dual role of guardianship of the territorial status quo and of national self-determination.

Sometimes the strains can be managed by agreement. The understanding that underpins the United Kingdom is that the union rests on the consent of its constituent parts. Sovereignty is divided between Westminster and the nations. When the Scots voted in an independence referendum they did so with the blessing of the rest of the UK.

The annexation of Crimea by Vladimir Putin’s Russia tells a different story. Mr Putin called it an act of self-determination – the people of Crimea are said to have backed the Russian invasion in a subsequent plebiscite. Most democrats see the annexation for what it was – an act of armed aggression that violated the sovereignty of Ukraine and defied a European postwar order that, save by agreement, said borders were inviolable. Take another step along Putin’s road and self-determination begets ethnic cleansing.

Scotland and Crimea sit at opposite ends of a spectrum. The hard cases are found in the middle, when a seemingly reasonable demand for separation by one region collides with the rights assumed by citizens of the larger state.

Madrid’s post-fascist constitution, endorsed at its promulgation by the people of Catalonia, invests sovereignty in the people of Spain. Catalans cannot vote to secede without affecting Spanish citizens in Castile or Andalusia. There is no magic formula to reconcile these competing nationalisms. Self-determination, as often as not, is in the eye of the beholder.

George Orwell, who fought in Catalonia on the republican side during the Spanish civil war, well understood this. “All nationalists,” he observed, “have the power of not seeing resemblances between similar sets of facts. A British Tory will defend self-determination in Europe and oppose it in India with no feeling of inconsistency.”

Few would claim that the Spanish government of Mariano Rajoy has been adroit in its response to the Catalan government’s independence vote. The Spanish constitution guarantees the autonomy of its nations as well as the indivisibility of the state. But Rajoy’s ill-judged use of force is a question of tactics rather than principle.

The relationship between Catalonia and Spain ultimately will be decided by political agreement or by civil war. It is far from self-evident that, offered a properly organised vote, a majority would favour independence. But one way or another, Catalans will have their say. Democracies depend for their legitimacy on consent. That said, simplistic comparisons between Catalonia and, say, East Timor or Kosovo do not bear even cursory scrutiny. And consent has a meaning deeper than the outcome of a one-sided referendum.

3 Fintan O'Toole: Prince Philip - asylum-seeker and citizen of nowhere, but rich and white