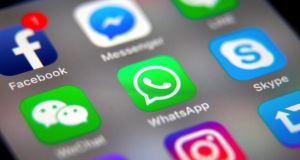 Abortion referendum: if an overseas entity were to launch an Irish social-media campaign it might not be realised until after the vote. Photograph: EPA

With only eight or nine months to go to the proposed referendum on the Eighth Amendment, how prepared is the State for the new challenges posed by lightly regulated, transnational social media platforms? Like other democracies, Ireland has built a legal framework to monitor and report on sources of funding for political campaigns, to ensure that broadcasters deal equitably with opposing views, and to prevent intentional dissemination of false information. However, recent experiences in the US, France and Germany have shown such measures fail to take account of a new reality: foreign interests can use services such as Facebook to target individual voters with carefully tailored, often misleading messages which will never be seen by the rest of the population.

In its most recent annual report, the Standards in Public Office Commission (Sipo) noted that greater transparency was required on funding and expenditure on referendum campaigns. But that hardly begins to take account of what has happened in several major democracies in the past year. In the US, special counsel Robert Mueller’s investigation into Russian interference on behalf of Donald Trump’s campaign continues. This week, Facebook admitted it cannot say for certain whether profiles or pages connected to Russia had purchased ads during the French and German election campaigns.

If any issue is guaranteed to draw attention and partisan support from outside this jurisdiction – on both sides of the debate – it is abortion. Currently, if an overseas entity were to launch a Facebook campaign of advertisements, pseudo-news sites and fake accounts, it is possible that this would not even be recognised until after the vote had taken place. And it is clear that Sipo or any other agency would be unable to compel Facebook to hand over any relevant information. This is unacceptable and makes a mockery of the State’s claim to provide an untainted civic space. In common with other democracies, Ireland needs to move swiftly to extend the principles of existing electoral legislation to include social media.