All peoples, and that includes the people of Catalonia; have the right of self-determination. 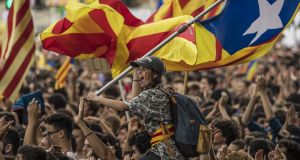 Students demonstrate in Barcelona against the position of the Spanish government to ban the self-determination referendum of Catalonia. Photograph: Dan Kitwood/Getty Images

The Parnell Monument which stands at the top of Dublin’s O’Connell Street is an almost 50m high triangular obelisk similar in prominence to the well known Columbus Monument at the bottom of La Rambla. Inscribed in its granite blocks is a quotation from a speech by Charles Stewart Parnell in whose honour the monument was erected more than 100 years ago.

“No man has the right to fix the boundary to the march of a nation. No man has a right to say to his country: ‘Thus far shalt thou go, and no further’; and we have never attempted to fix the ne plus ultra to the progress of Ireland’s nationhood, and we never shall.”

The will of the people shall be the basis of the authority of government; this will shall be expressed in periodic and genuine elections which shall be by universal and equal suffrage and shall be held by secret vote or by equivalent free voting procedures.

Article 25 of the International Covenant on Civil and Political Rights (“ICCPR”) codifies these rights, requiring that:

Every citizen shall have the right and the opportunity, without any of the distinctions mentioned in article 2 and without unreasonable restrictions:

(a) To take part in the conduct of public affairs, directly or through freely chosen

universal and equal suffrage and shall be held by secret ballot, guaranteeing

the free expression of the will of the electors;

All peoples have the right of self-determination. By virtue of that right they freely determine their political status and freely pursue their economic, social and cultural development.

Self-determination denotes the legal right of people to decide their own destiny in the international order. At its core it is a right of “all peoples”.

This to me is the core principle underpinning the call to “Let Catalans Vote”. It is also why it should be supported by all democracy-loving Spanish people who support the rule of international law.

It appears to me that in preventing, or trying to prevent, the people of Catalonia from exercising their right to vote on whether they should have independence, or on what form that independence might take, the Spanish government is trying to do what successive Britain governments did to Ireland in the 19th century. They are trying to set the “ne plus ultra” to the aspiration of a people for independence and nationhood.

All peoples, and that includes the people of Catalonia; have the right of self-determination. The majority of the people may not ultimately choose to vote for independence – as was the case in Scotland – but that is not the point. That is not what is at stake here in terms of international law or in terms of respect for democracy.

The fundamental point and principle is that a distinct people with its own history, language and culture, and a people who self-regard themselves as separate, and are entitled to do so, be given what the Scottish were given – the right to set the “boundaries to the march of their own nationhood” in the words of Parnell. The right to decide whether they wish to go it alone, or to remain part of the kingdom of Spain.

The people of Spain, and those of us outside Spain, can debate and have our own strong views as to the wisdom of independence for Catalonia and whether it is in the best interests of Spain or Catalonia or the European Union. But again that is beside the point. The point is that it is the people of Catalonia who must decide.

Ultimately the Spanish government should realise (and have the confidence that they can win the hearts and minds of people in Catalonia – or not) that you cannot keep two peoples together if one of those does not want ultimately to be governed by the other.

The example of the Czech and Slovak republics is a good one. The “Velvet Divorce” of 1992 may have broken lots of Czech and Slovak hearts, including its then president and leader of the Velvet Revolution, Vaclav Havel, who wished the two parts of the country to remain as one.

But the people of Slovakia decided that they wished to go it alone and their Czech neighbours respected that decision and the will of the Slovak people.

Bill Shipsey is a barrister and human rights activist.