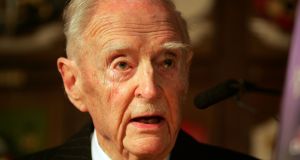 Liam Cosgrave was a politician of personal integrity and steely resolve who as taoiseach in the 1970s ensured that the institutions of the State survived the greatest threat to their legitimacy since the Civil War.

Cosgrave made some serious political mistakes during his period as taoiseach from 1973 to 1977, but the Fine Gael-Labour coalition he led had a number of significant achievements to its credit on the economic and social front as well as on the fundamental question of the security of the State.

The biggest influence on him, both personally and politically, was his father WT Cosgrave, who led the newly independent state for the first 10 years of its existence following the deaths of Arthur Griffith and Michael Collins in August 1922.

One of Liam Cosgrave’s earliest childhood memories was standing in the burnt-out ruins of his family home at Beechpark in south Co Dublin. It was destroyed by republicans during the Civil War. One of his uncles was murdered by the IRA during the conflict. That family experience coloured his approach to politics and underpinned his implacable opposition to the violence of the Provisional IRA during his time as taoiseach.

Elected leader of Fine Gael in 1965, he had to withstand a series of plots to remove him after he failed to win power in the 1969 general election, but his fortunes changed when Jack Lynch dissolved the Dáil in February 1973.

With the election already underway he came to an agreement with Labour Party leader Brendan Corish and the two parties fought the campaign on a joint manifesto. His close personal relationship with Corish was the bedrock of the coalition and enabled it to withstand the shock of the 1974 oil crisis. Some of the ambitious social and economic reforms planned had to be put on hold, but the Coalition implemented a massive house-building programme, expanded the social welfare system, introduced a controversial wealth tax and reformed the labour laws.

The progressive agenda of the government was overshadowed by Cosgrave’s decision to vote against the legalisation of contraception in a Bill introduced by his minister for justice Patrick Cooney. While the parties in government had agreed there would be a free vote on the issue, the taoiseach’s decision in 1974 to vote against and thus ensure the Bill’s defeat, caused a sensation.

The credibility of the government never fully recovered from the episode and it wasn’t helped by the resignation of President Cearbhall Ó Dálaigh after he was described by minister for defence Paddy Donegan as “a thundering disgrace”.

With the benefit of hindsight, the achievements of the Cosgrave government can be acknowledged. His dignified refusal to engage in any form of political controversy in the 40 years since he retired as party leader was the measure of a man who served his country well.