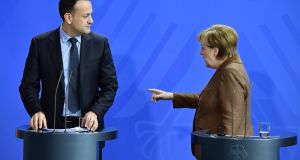 I am a fan of neither hip-hop nor musical theatre but on a birthday treat for my daughter to see the musical Hamilton last year, I was enthralled from start to finish.

Hamilton, an orphan who came penniless to New York in the 1770s, rose to become George Washington’s right-hand man during the American war of independence, a successful lawyer, the most influential promoter of the new US constitution and later the first secretary of the US treasury.

Perhaps his most important achievement in that role was to “federalise the debt” – taking the debts of the 13 colonies-turned-states and gathering them together in one pool of US government debt that could be raised, securitised and traded, backed by the wealth of the rich colonies and revenues from tariffs on trade.

It was, some commentators suggested, Europe’s Hamilton moment – when German resistance to mutual debt was overcome and a new financial order signalled

A centralised financial system was perhaps as important a unifying force for the new country as the Continental Army that won independence from the British almost a decade earlier. More about how Hamilton did it a bit later.

This week, in a development that is likely to be among the most significant of the year, Angela Merkel and Emmanuel Macron agreed to propose – for the first time – a joint EU debt plan.

Under the plan – which will have to be agreed unanimously by all member states – the European Commission would borrow €500 billion from financial markets and give it to the member states hardest hit by the pandemic in the form of grants. The money would be paid back by the EU slowly, over the long term, with the contributions of member states pegged to the EU budget.

“Extraordinary circumstances call for extraordinary measures,” Merkel said after the plan was announced. “Germany and France are standing up for Europe. ”

It was, some commentators suggested, Europe’s Hamilton moment – when German resistance to mutual debt was overcome and a new financial order signalled. Merkel usually moves in halting steps, but very occasionally she moves in great leaps. This looks like one of the latter.

But resistance to the idea of mutual EU debt remains strong. As the decision of the German Constitutional Court in Karlsruhe last week demonstrated, Merkel faces hefty political and legal resistance at home. The EU’s “frugal four” of Austria, Denmark, the Netherlands and Sweden remain implacably opposed.

But Merkel, even in the final phase of her extraordinary career, remains Europe’s indispensable leader, and if France and Germany are united, the EU tends to incline towards their will. Germany takes up the six-month presidency of the EU in July.

So will it fly? What will it take to make it happen? Back to our friend Hamilton. How did he get his debt plan through, against fierce opposition from various quarters, some of whom feared an overmighty central government would simply substitute one remote and unaccountable ruler for another and others who wondered why their rich states should take on debt from their poorer neighbours?

In a compromise finally and famously brokered over dinner with Thomas Jefferson and James Madison (Virginians, and opposed to debt federalisation) in 1790, Hamilton won their backing for his plan in Congress by offering to support the establishment of the new national capital, then a source of much dispute between the southern and northern states, at a site on the Virginia-Maryland border at the Potomac river.

Compromise and deal-making are the essence of politics. Over the coming months, Merkel and Macron, their agents and allies, will cajole, persuade, bargain and trade to promote the great step forward that they proposed this week.

Some of the compromises might be unsatisfactory or unedifying; the task of getting Hungary and Poland on board, for example, is unlikely to be helped by taking action against these countries for their violation of democratic norms.

Where does Ireland sit in all this? Dublin is a strong supporter of the idea of mutual EU debt, not just to deal with the costs rebuilding after the pandemic, but as an important bulwark of the common currency. We know what can happen when countries are left to the mercy of the financial markets.

But like everyone else, Ireland will have to accept things we don’t like if the plan is to work. The small print of the proposals stipulates that the grants to states will only be made in return for commitment to follow “sound economic policies and reform agendas”.

In addition the Franco-German plan requires tax reforms that will improve the “framework for fair taxation”, in particular of the digital economy. This is code for pressure on Ireland’s tax revenues from digital multinationals. Some complex and difficult trade-offs await the next government.

Which brings us back to the horse-trading going on at home on the formation of the next government. Everyone in that process will have to compromises, especially if the process is to come to a successful conclusion in the coming weeks.

There are signs – not least in the quixotic decision to challenge Eamon Ryan for the leadership of the Green Party – that at least some of the participants have not yet internalised this. Taoiseach Leo Varadkar and Minister for Finance Paschal Donohoe warned in recent days that we can’t borrow for ever – a message directly aimed at the talks.

You would think everyone would have been able to work that out themselves. But I am told that the thorny subject of deficit reduction next year has not yet been addressed in any meaningful way. Government formation remains urgent but uncertain. Perhaps a few people need to watch a certain musical.