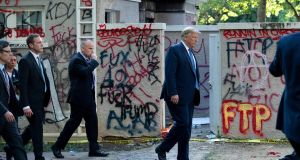 US President Donald Trump walks back to the White House escorted by the Secret Service after appearing outside of St John’s Episcopal church across Lafayette Park in Washington, DC on June 1, 2020. (Photo by BRENDAN SMIALOWSKI/AFP via Getty Images)

Perhaps we have reached a turning point. The sight of peaceful demonstrators being cleared from Lafayette Square to allow an unmasked Trump to lead a posse of white acolytes to preen in front of a church as he waved ‘a bible’, turns the stomach. The uninvited, follow up pose with Melania in front of a statue of John Paul II cements his drive for the right-wing Christian vote: those who prioritise an anti-abortion majority on the Supreme Court over charity, humility, and kindness.

His callousness, racism, and lack of empathy for those who died unnecessarily from Covid-19, due to his ignorance and denial, count for nothing. As the Bishop of Washington rightly said, his is the antithesis of the Christian message. This performance art, like his naked face, is to assert his manliness, to mitigate the image of him being hustled into a bunker. He threatens Governors, mayors and demonstrators with overwhelming force and asserts his ability to deploy the military to States reluctant to heed his call to violence. And yet, he cannot.

After the murder of George Floyd, Philadelphia, like many US cities, saw an eruption of anger on the streets. A building burned half a block from where I live and many of the shops close by were looted. The Irish American Mayor, Jim Kenny, and the African American Police Chief, Danielle Outlaw, managed the situation well. They expressed their outrage as the systemic racism of which Floyd’s murder was but the latest example, praised and supported the right to public protest and urged calm. Importantly, the police did not confront the looters that first night and focused on protecting and enabling the fire department in management of the fire.

Who were the looters? There were agents provocateurs for sure and we need to know who they were - antiFa, white supremacists, Russians? That night they spray painted and smashed windows with baseball bats, clearing the way mostly for local teenagers to grab cosmetics, sporting gear and luggage in which to haul it. The police behaved with restraint when the violent minority taunted and physically provoked them.

The next day, Kenny and Outlaw did use tear gas when otherwise peaceful protesters spilled onto a freeway. That night there were confrontations with the police and national guard in West Philadelphia, a mainly African American neighbourhood. More looting, pepper spray and tear gas after the curfew, into the night.

There have been deaths and injuries - a looter shot by a gun store owner; a man died trying to blow up an ATM. But by and large, despite the depiction of mayhem by Trump, the predominant image of Philadelphia has been of crowds of racially diverse, mostly young people, marching, chanting and peacefully expressing their outrage. Also, the police; around these marches on bicycles not in military vehicles, the helicopters high in the sky. In parts of the city, police took the knee with the protesters.

The immediate demands of the protesters are measured: an independent body to investigate police misconduct, requirements for education and training, a re-focus of police resources on training, de-escalation and community building, an “absolute necessity” doctrine for lethal force and codifying in law a requirement for police to have positive control over the evidence train of custody.

However, this murder of George Floyd is just a symptom of a disease that has been present for 400 years. As Spike Lee has pointed out, these United States were founded by eliminating its native peoples, stealing their land, and importing slaves from Africa. The defenders of this tradition may have lost the War between the States, but this civil war goes on. The present party of the confederacy, perversely founded originally by Lincoln, is in power.

I was in the US, in Minneapolis, in the late 60s and there are some stark parallels. Then the points of friction - civil rights and Vietnam - were also racial and generational. Like now, you could sense that it was a hinge point. So now, which way will we turn?

Many of my friends think that Lafayette Park will spell the end of Trump.

So how did it end in the 60s? The antiwar protestors stormed the Democratic convention in Chicago and were violently suppressed by the Irish American Mayor Daly. LBJ withdrew and Hubert Humphrey, his Vice President, became the nominee. He almost matched Nixon in votes but lost badly in the electoral college.

This time it is calculated that Trump could lose the popular vote by 5 million and still win in the electoral college. Even if he loses, will he cede power? Let us hope, in this case, that history does not rhyme.