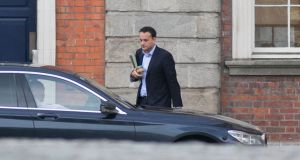 Not a great week for Government or governance. At a time when the country’s leaders should be concentrating on the plan to reopen the social and commercial life of the country, they spent much of the week trying to defuse the row emanating from the appointment of Séamus Woulfe to the Supreme Court.

Despite what everyone had to pretend, the appointment of Woulfe was – in my view, following dozens of conversations with people in and around government and the legal profession this week – exactly what it looked like: it was a shoo-in for the former attorney general. As far as I can see, this is also the almost universal belief of everyone around Leinster House, in all parties, no matter what they say in public. If it walks like a duck and quacks like a duck. . .

I should add that there was nothing legally or constitutionally improper about Woulfe’s appointment. The Government is entitled to appoint to the Supreme Court – and indeed any other court – whoever it wants. Woulfe was passed as suitable for appointment by the Judicial Appointments Advisory Board.

Legal panjandrums were surprised that he went straight to the Supreme Court; he was not , it’s fair to say, in the mould of the tiny band of m’learned friends who have made that vertiginous assumption; no Adrian Hardiman he, no Niall McCarthy. Yeah, but so what? If you think back to July when Woulfe was appointed, there was no outrage .

But it’s still a shoo-in, and everyone knows it is. The process was sharp, to say the least of it. The Taoiseach and the leader of the Green Party were simply told that Woulfe had passed through the JAAB process, which had forwarded only one name for appointment. This was true, but it was only a partial truth. It suggested there was only one candidate for the job. But that wasn’t the case.

Varadkar says he didn’t know the names of the other judges who applied; but he had already indicated to Micheál Martin and Eamon Ryan that Woulfe would be appointed. Remarkably, the new Minister for Justice, Helen McEntee, came to the same conclusion, having considered the other names. Or maybe not so remarkable.

The view in Fianna Fáil and the Greens is that Leo Varadkar pulled a fast one. The coalition partners were annoyed about it, but these are the sort of things you have to put up with when you’re in a coalition government: if it’s not a complete dealbreaker, you have to defend it in the media and in the Dáil, no matter what you really think. They could have said whoa, hold the weddin’. But they didn’t. They went along with it. Not worth the row. Join the army, wear the boots.

Sometimes politicians find themselves defending in government things they decried in opposition. Seldom does it come round with such symmetry as it did for Micheál Martin, criticising in the Dáil the appointment of Máire Whelan (Enda Kenny’s AG) to the Court of Appeal in 2017, solemnly intoning this week that the separation of powers prevented the Government from answering questions about it.

Some senior Government figures are pretty annoyed about it all – by both the events themselves and the handling of them. One Minister complained privately that the Government was “defending the indefensible”.

But the prevailing view is: lookit, it might not be pretty, but this is how business is done. Stick together, keep the head down, we’ll tough it out. Fianna Fáilers, by the way, will expect the favour to be returned next time one of their Ministers lands in the manure. (On past experience, they won’t have to wait too long.)

But decisions have consequences. The appointment of Woulfe became an issue only because of his subsequent behaviour. His attendance at the Oireachtas dinner, his interview with Ms Justice Denham (in which he played the victim, denied he had done anything wrong and disparaged the media and politicians for making a fuss about it) and his subsequent correspondence with the Chief Justice all raised significant doubts about his suitability for the court. But once on the court, there are good reasons for making the threshold for removal high. The judgment of most TDs and Ministers who spoke this week – that he shouldn’t be impeached, but should probably resign – seems to me to be about right.

But if Ministers displayed sangfroid dealing with the Woulfe conflagration, they demonstrated the opposite when footage of people drinking in Dublin city centre was widely circulated on social and then mainstream media last weekend. Micheál Martin let his Minister for Health know that something must be done; and the Minister for Health duly set to work. He would ban the sale of takeaway pints. Then no, perhaps not. He would ban the drinking of the takeaway pints. Er no, maybe not. Maybe he wouldn’t do anything except talk to the gardaí about it. Well, off with you so. See where that gets you.

Martin is a politician who likes to talk about substance, rather than style. Policymaking on the hoof in response to social media storms is not the mark of substance.

In the coming days the Government must make far-reaching decisions, under severe pressure from its own public-health experts, amid great uncertainty. The decisions will require courage, far-sightedness; their implementation and communication will require discipline, clarity and coherence. None of which have been much in evidence last week.

Given what’s at stake, you’d have to hope that next week will be better than this one. For all our sakes.