Pat Leahy: One way or the other, the referendum will change Irish politics

A Yes vote will alter the political landscape; a No vote could upend it 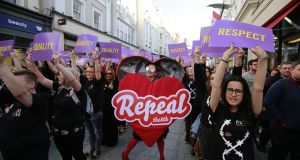 Campaigning for a Yes vote on Dublin’s Grafton Street. A Yes result would reinforce the image of Varadkar as a young, liberal, progressive leader. Photograph Nick Bradshaw

Next Friday’s referendum will be an enormously consequential event for Irish society. But it will also have immediate political consequences which very few of the political class appear to have thought through.

Whatever the result, it will change Irish politics. Lots of people say: but the marriage referendum didn’t change anything in politics. They’re right. It didn’t. But I think this referendum will.

Take the less likely possibility first: a No vote. Sure, the Irish Times/Ipsos MRBI poll we published on Thursday says that the Yes vote is by some distance the most likely outcome – the path to 50 per cent plus one is much easier for the repealers than it is for the retainers. But a dramatic late surge for the No side is certainly possible, even if it is not likely. Anyone with a passing familiarity with the history of Irish referendums could tell you that.

If it is a No vote on Friday, the consequences for Leo Varadkar’s Government will be calamitous. This shaky and unsure coalition is almost certainly in its last year – actually probably its last six months – of its lifespan anyway, and a defeat on Friday would be sufficiently destabilising to bring the end closer, and maybe much closer. It is hard to see how the Government could muster the political capital to do anything after such a devastating defeat.

The fallout would be most serious for the Taoiseach himself. Varadkar has been criticised for his languid approach to the campaign so far, though I’m told he will throw himself into the campaign for the final week. But he has not been to the forefront of the campaign thus far, and if the proposal is rejected I think he will take a lot of blame.

And if it is defeated there will be a lot of blame to go around. There will be an outpouring of outrage across the media; Varadkar will cop plenty of it. Social media platforms might well combust. But more enduring would be the anger of a lot of women, young women especially, for whom this referendum is very, very personal.

Managing and effectively channelling the fierce feelings of many young women on the Eighth Amendment into productive political activity has been a constant challenge for the directors of the repeal campaign. Their determination and fervour has given the repeal campaign the feeling of a movement reminiscent of the final stages of the same-sex marriage referendum. But the campaign leaders have constantly been advising their footsoldiers (and some of their higher ranking officers) to concentrate on the middle ground, to concentrate on winning votes, not just plaudits from their friends.

It would be hard to overestimate the depth of feeling among many repeal-supporting women, and even more especially younger women. And even though they may not care much about politics, that is precisely why it will matter for politics. It will colour their political views of government and opposition alike.

If the referendum is defeated, all that energy and emotion will congeal into anger and recrimination – and a lot of it will be directed at Varadkar. It would transform his premiership in an overwhelming negative manner.

See how the cervical cancer scandal has affected the Government’s ratings, and it’s not even its fault. You would be looking at that on steroids. Anti-repeal voters would blame Varadkar for bringing the proposal in the first place; repealers would blame him for losing it.

Micheál Martin will face different but also intense fallout in the event of a No vote. While Fianna Fail voters are marginally in favour of repeal, the Fianna Fail parliamentary party is squarely against it. Martin would almost certainly face a rebellion of some sort. There are those in his party intent on making life difficult for Martin if the referendum is passed; if it is defeated they would make life impossible. You got it wrong, they would tell him.

And Mary Lou McDonald would face similar accusations, though Sinn Féin’s internal discipline would mean she would not be threatened in the way Martin would.

So what happens if it’s a Yes on Friday?

First the most obvious: the Government will have won, and that’s good for it. Of course, so will Martin and McDonald. But the principal political capital will be amassed by the Government which brought forward the referendum. Instead of being blamed by the legions of repealers, Varadkar would be lionised by them.

It will reinforce the image of Varadkar as a young, liberal, progressive leader – and crucially as one who wins elections. Even anti-abortion Fine Gaelers would like that. The honeymoon would carry the Government through the forthcoming Brexit travails and into the autumn budget.

But the size of the No vote, even if it loses, will be important too. A large and sizeable pro-life lobby is not going to go away; it will ready itself for the legislative battle to come with the aim of restricting the grounds for legalised abortion as much as possible.

It will target Fianna Fáil TDs especially, but also TDs of every party and none. If TDs think that they have been pestered by campaigners during the referendum campaign, wait until the legislation comes before the Houses of the Oireachtas and they have to deal with the business of translating the will of the people into the minutiae of legislation, section by section, line by line, word by word.

I think you will see a sustained and powerful campaign to make the legislation as restrictive as possible, led by a new force in politics, parliamentary and extra-parliamentary, that the referendum campaign has brought into being.

A No vote has the potential to upend the political landscape; but a Yes vote will change it as well.

1 Dancing with the Stars has hit Father Ted levels of farce
2 Storm Dennis washes abandoned ‘ghost ship’ onto rocks off Co Cork
3 Everything you need to know about pensions but were afraid to ask
4 Caroline Flack death: Public disquiet over media conduct grows
5 Forget a grand coalition – here is what the next government will most likely look like
Real news has value SUBSCRIBE