Reasons to vote No in the abortion referendum

Breda O’Brien: Having to travel dissuades many, and virtually none regret their living child 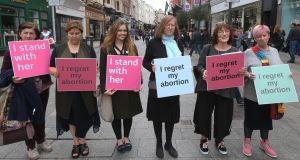 Advocates for a No vote in a demonstration on Grafton Street in Dublin. Photograph: Stephen Collins/Collins Photos

Undecided voters will have to decide in the next few days whether they accept the premise – framed by the Government and Together for Yes – that the only alternatives are to maintain the status quo or introduce abortion on wide-ranging grounds.

What if the Government instead tried to eliminate the root causes of why women feel forced to choose abortion ?

What if Leo Varadkar stopped trying to scare women into voting Yes by suggesting 14-year jail sentences were inevitable for possession of abortion pills even though it has never been enforced?

It was a Fine Gael government that copperfastened that 14-year sentence in 2013. Varadkar could easily amend the 2013 Act in a way that respects the right to life of the unborn child and still protects vulnerable women.

The Government could also launch a massive public information campaign highlighting the dangers of taking abortion pills unsupervised, all while ramping up supports for lone parents.

But instead, a Fine Gael-led government hedged the One Family Payment with so many conditions that it amounted to serious cuts. A 2017 Indecon report showed that lone parents moved from poverty on social welfare to poverty in precarious low-paid work, but the government saved €45 million.

If politicians can persuade us that the only two choices are repeal or the status quo, they don’t have to look after our citizens. If that troubles you, vote No.

And speaking of abortion pills, BPAS, the biggest abortion provider in Britain, declared that “staggering” amounts of illegal abortion pills are sourced online in the UK where abortion is available everywhere. Getting rid of the Eighth Amendment won’t solve that problem. If being told that it will bothers you, vote No.

As for babies stigmatised by that ugly, out-of-date term “fatal foetal abnormality”, the only options presented are either being forced to travel or abortion without term limits.

But when parents choose to continue in these tragic circumstances, they are generally enormously positive about how sensitively the dedicated bereavement midwives support them both in grieving and beginning to heal.

Until the baby survives long enough to go home and then the parents are left scrabbling together a patchwork of services, mostly from wonderful but overstretched charities.

If it troubles you that parents whose baby’s span of life will be short are treated like this, vote No.

If it troubles you that the failed experiment, the HSE, will administer the liberal abortion regime, vote No.

With breath-taking arrogance, the Government assumed that GPs would run this service without ever consulting them. Up to 70 per cent have refused. Would you take the risk of prescribing for a woman who in fact might have an ectopic pregnancy, thereby endangering her life?

The recently elected head of the National Association of General Practitioners, Dr Maitiu O’Tuathail, has said in an interview that nowhere in the world is abortion provision GP-led and neither do we have the resources to do it.

Furthermore, former master of the Rotunda Dr Peter McKenna estimates that 40 per cent of abortions carried out in Ireland will be surgical, perhaps up to 2,000 out of 5,000 abortions, all taking precedence over other so-called elective surgeries such as repairing prolapsed wombs.

This will be another exorbitant cost on an already shambolically dysfunctional HSE, all to abort mostly healthy babies of women who with decent support could keep their babies and not just survive but thrive. If that bothers you, vote No.

If it worries you that all the Government and Together for Yes are talking about are the hard cases, vote No.

Dr Peter Boylan, in his book The Irish Pregnancy Book, explains that “most terminations are performed for social reasons but some are performed because of foetal malformation or illness in the mother”.

What is the Yes side directing your attention away from by focusing on rape? The reality of how abortion on demand will operate? Rape and incest rightly provoke primal disgust and anger, which should be directed at perpetrators and a system where going to court is a hellish ordeal, where convictions are rare and sentences sometimes inexplicable.

But if pro-choice advocates can form associations in people’s minds between that necessary primal anger and the Eighth Amendment, they can hide the fact that in England and Wales where abortion was introduced to help rare, hard cases, it is now normalised to a shocking degree.

Yes, Irish women have abortions. But more importantly, many thousands of people are alive in Ireland today who would not be if it was not for the Eighth. Having to travel for an abortion dissuades many, and virtually none of them regret their living child. Lots of women regret having an abortion. Honour women’s experience. Force the Government and the rest of us to do better. Vote No.

1 Coronavirus: Ireland’s infection peak may have passed, toll could hit 400 by August, report forecasts
2 Last couple in paradise: The Covid-19 honeymooners stranded in the Maldives
3 Coronavirus: More ‘striking’ evidence BCG vaccine might protect against Covid-19
4 Things are looking up again: Spectacular supermoon due in Irish skies
5 I’ll be watching my father’s funeral on Zoom from New Zealand today
Real news has value SUBSCRIBE