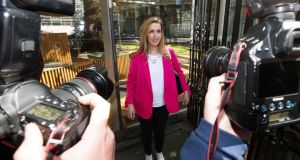 What have we learned some three weeks into the ongoing CervicalCheck controversy? With details still emerging, there is a pervasive fear of further bad news for women who have attended for cervical cancer screening. However one thing can be said with reasonable certainty: the issue is primarily about the poor flow of information.

This includes the absence of information from CervicalCheck to patients who were the subject of an audit after they had been diagnosed with cervical cancer; impaired flow of knowledge between CervicalCheck and gynaecologists and general practitioners; an astonishing ignorance of open disclosure policy within the health system at senior levels of CervicalCheck management; and a failure by the Department of Health to ensure the implementation of its policy of voluntary open candour across the health system.

Speaking at the Public Accounts Committee (PAC), Health Service Executive interim director general John Connaghan said – rightly – that public confidence in the CervicalCheck programme had been “sadly undermined”. A tangible reflection of the wider impact of this emerged in an Irish Times/ Ipsos MRBI opinion poll which recorded a seven per cent fall in satisfaction with the Government; the figure is especially pronounced among women whose satisfaction dropped from 41 per cent in mid-April to 29 per cent now. This is a remarkable slump.

The PAC also heard direct evidence from CervicalCheck victims Vicky Phelan and Stephen Teap (whose wife Irene died from cervical cancer last year). They emphasised the need for accountability and, such is their distrust of the health system, that they called for officials directly involved to step aside immediately.

Being accountable brings with it an obligation on an organisation or individual to account for their activities, accept responsibility for them and to disclose the results in a transparent manner. It is abundantly clear, after three weeks extracting information, that the Department of Health, the HSE and the Government have failed to be accountable. Politicians fudged the opportunity to introduce mandatory open disclosure; the Department of Health gave unhelpful political advice and failed to realise the import of memos circulated to it in 2016; and the HSE demonstrated again that it is an ill-managed monolith with an insidious culture that fails to prioritise patients.

The medical profession, too, must get its house in order. How can so many practitioners have been unaware of the clear advice on open disclosure outlined in the Medical Council’s guide to professional conduct and ethics? Trust in our public health system is at an all-time low. The health service must be rebuilt from the ground up by putting patients first though that task has never seemed more daunting.