Ruadhán Mac Cormaic: The EU is helping to rebuild a police force on the West Bank 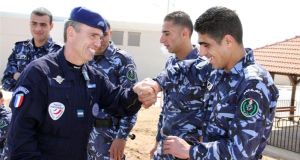 EUPOL COPPS, the European Union’s police and justice mission, based in Ramallah, comprises more than 100 serving police officers from around Europe, including several from Ireland. Photograph: EUPOL COPPS

The police jeep emerges from the traffic-choked streets of central Nablus and picks up speed as we climb towards the city limits. Squashed into the vehicle are four officers from the Palestinian Civilian Police (PCP) and your columnist, who has been allowed to join the patrol dispatched this afternoon from the central Nablus barracks – a station that serves a population of almost 300,000 in Nablus, its refugee camps and the city’s hinterland, in the heart of the West Bank.

What the sergeant wishes to show me is a spot that isn’t marked by a sign, let alone a checkpoint. A couple of kilometres from the city centre, the jeep pulls in at the side of the road, next to a school. Two of the officers step out for a smoke, while the sergeant places a radio call to the operations centre to ask if we can go any further. A short while later, the voice appears on the crackly line. “No co-ordination. Return to barracks.”

This unmarked, arbitrary border is the point at which Area A, where Palestinians are in control of security, becomes Area C, over which the Israelis assert authority. Even though the same Palestinian police force has a station in the next town along the road, Asira ash-Shamaliya, the patrol cannot continue beyond the invisible demarcation line without having co-ordinated with the Israelis and secured their permission in advance.

The division of the occupied West Bank into three areas is a legacy of the Oslo peace accords in the mid-1990s. Area C, which covers the eight major towns and population centres of the West Bank, including Nablus, is under full Palestinian civil and security control. Area B, which accounts for about 22 per cent of the West Bank, is under Palestinian civil control but Israeli security control. The remaining 60 per cent of the West Bank was designated Area C. There, Israel retains full control over security and civil affairs, including planning, building and infrastructure. As a general rule, the emptier the land in the West Bank, the more likely it is to be in Area C, because Israel has used its control to block any Palestinian construction and has rezoned land extensively into illegal settlements, state parks, and nature reserves where no building can take place.

Restrictions on movement are just one of many obstacles standing in the way the development of the PCP, an 8,000-strong force that had to be rebuilt from the wreckage of the second intifada in the mid-2000s, when the Israelis destroyed much of the Palestinians security services’ infrastructure. But the development of the force is widely seen as a vital part of the project to ensure a viable future Palestinian state can one day be established.

That explains the presence in the West Bank for the past 12 years of EUPOL COPPS, the European Union’s police and justice mission, based in Ramallah. Comprising more than 100 serving police officers from around Europe, including several from Ireland, the mission helps to train Palestinian police and prison authorities, share expertise and work with the interior ministry and prosecution service in areas such as legislation and reform of institutions.

Together, the Palestinian territories are the biggest recipient of EU aid. The purpose of that money, and of the police mission, is to build a functioning Palestinian state from the ground up. The mission has had successes. The PCP has rebuilt itself since the mid-2000s. New structures of accountability and transparency have been adopted, and progressive strategies on issues from gender to prisoner rehabilitation have been put in place.

The mission has a solely technical mandate, but for the EU it also serves an important political purpose: buying it more influence. For both the EU and the Palestinian Authority (PA), the mission is also a useful way of balancing the dominance of the United States as a sponsor of security sector reform in the region.

But the police mission – much like the EU’s use of its ample soft power more widely in the Palestinian territories – suffers from the same vulnerabilities as the Palestinian structures themselves. A recent success was the passing of a police law last December, but it took eight years to achieve it – a task made all the more difficult by the absence of a Palestinian parliament, which has not functioned since the Hamas-Fatah split in 2006. And the longer the miserable current conditions in the occupied territories persist, the more exposed the EU could become to the same charge many Palestinians level at the PA: that by propping up a Palestinian police force that cooperates on security with the Israelis, it is increasingly complicit in the maintenance of the status quo.

Yet the alternative – disengaging, and allowing the policing structures of a future Palestinian state to crumble – would risk further undermining the idea of Palestinian statehood at a time when it faces its greatest threat in a generation.