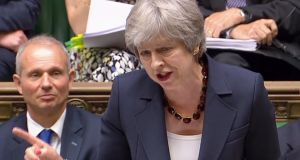 Britain’s prime minister Theresa May: must fight and decisively win the battle within her own government that she has been avoiding for the past 18 months. Photograph: PRU/AFP/Getty

As the Government scrambles to deal with the immediate crisis of the cervical cancer controversy, it faces decisions on Brexit which will have far-reaching consequences for Ireland, North and South.

These consequences will extend well beyond the lifespan of the now familiar tale of HSE failures, outrage (both confected and genuine), blame, buck-passing and scapegoating. The cancer controversy, dreadfully tragic though its personal stories are, will pass in the way that political scandals always do. The women affected will deal with the consequences in their own lives. The bureaucracy will hunker down. Media attention will wander. There will be another HSE crisis before too long. But Brexit will shape the country for decades to come.

This is one of the central challenges of political leadership – to prevent the urgent from crowding out the important.

The CervicalCheck controversy poses an obvious personal danger to the Taoiseach as a former minister for health, including during the period when some of the most abject failures in dealing with the consequences of the inaccurate smear tests occurred. As of now, there appears to be a moat around Leo Varadkar’s office: his officials insist he was not informed. But a stray email or briefing note could change that picture, and now that the human shield of Tony O’Brien has departed, the next turn in the saga will likely bring it closer to the politicians.

There is no evidence that Varadkar – or his successor Simon Harris – did anything they shouldn’t have or failed to do something they should. But the scandal has still convulsed their government; in the hours before the HSE chief’s resignation on Thursday, there was something approaching terror in senior government circles.

The politicians understand the public outrage and are seeking to navigate its whitewater; they’re right. Senior officials believe the public debate risks crossing from anger to hysteria, and that the screening programme – which saves women’s lives – will be destroyed as a result. Frankly, they have a point.

Amid all this, the Brexit process is at a crucial point – a fork in the road – which requires clear-sighted thinking and wise decision-making.

Varadkar, along with his two principal lieutenants, Simon Coveney and Paschal Donohoe, and the phalanx of officials that surrounds them will be faced with decisions in the coming weeks, the outcome of which will be entirely uncertain.

Many decisions that political leaders face are between identifiable (but often unappealing) alternatives. To spend money here or to spend it there. To choose this plan over that one. To make this compromise but not that one.

The Brexit decisions that are approaching will have none of that certainty. They will be choices which have uncertain outcomes, and whose wisdom or folly will only be apparent once other parties make their decisions and complex diplomatic and political dynamics play out on an international stage. There is no playbook for it. Confronted by a problem, the Civil Service always asks: what did we do before? But it has never done this before.

To say this is complicated and fraught doesn’t quite capture it. According to some people at the heart of government, who have spoken frankly on the basis of anonymity, these are among the most important calls an Irish government has made in the last few decades. This isn’t just senior hurling; it’s the All-Ireland final.

The current situation is as follows: Downing Street has been signalling to Dublin that it intends to push through its proposals for a customs partnership which would largely keep the UK within the rules of the customs union (even if not formally a part of it) and therefore mean no hard border in Ireland.

In return, it wants Ireland to ease off on its demands for a legally binding agreement on the backstop – the guarantee that if all else fails, there will be no significant regulatory differences between North and South. Downing Street now believes it couldn’t get the backstop through Westminster. But it wants to do the customs partnership. It also wants Dublin to convince the EU that a customs partnership will work. There is a high level of engagement between Dublin and London at present, despite the poor relationship between the Taoiseach and prime minister Theresa May, especially with Philip Hammond and David Lidington, who are regarded by Irish Ministers as the “grown-ups”. It was these two men that Coveney visited in London on Thursday.

There is a high level of engagement between Dublin and London at present, despite the poor relationship between the Taoiseach and prime minister Theresa May

The provisional conclusion that has been reached, I understand, is that the Government may be prepared to ease off on its demand for the backstop if – and only if – the British government demonstrates a firm commitment to, and viable plan for, the customs partnership option in such a form that the European Commission thinks is a realistic way forward.

That will require May to go much further than she has heretofore. But more crucially, it will require her to fight and decisively win the battle within her own government that she has been avoiding for the past 18 months. In other words, she must impose her will on the cabinet she leads. She would almost certainly lose some of her Brexiteers, including Boris Johnson. But the time for the two-year-long British fudge is coming to an end.

Dublin and Brussels doubt May’s will, but they have even more serious doubts about her capacity. So they will wait and see what the strength of her customs plan is, and whether she has the strength to carry it through.

Once that is clear, the time will come for the cabinet triumvirate to decide. Understatement of the year: it’s a Big Call.