The referendum has not changed the world, but it has created opportunities for women

Politicians and campaigners from the 'Yes' camp arrive at the RDS to a hero's welcome. Video: Enda O'Dowd 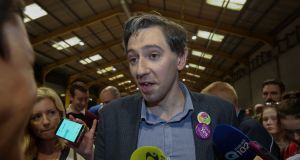 Simon Harris is among the politicians who have benefited from the abortion referendum campaign. Photograph: Gareth Chaney/Collins

Inhabitants of Leinster House and its environs, the village-y cockpit of national political leadership centred on a few acres in the south city centre of Dublin, were taken aback by the size of the winning margin in last weekend’s abortion referendum.

It was not the outcome that surprised people, rather it was the landslide for Yes, which lit up the political firmament on Friday night after the Irish Times exit poll was revealed at 10.01pm. It was confirmed when the boxes were opened on Saturday morning.

A great wave for repeal swept the country, delivering majorities in (almost) every constituency, in every age group under 65, both genders, in urban and rural Ireland.

Inevitably there were claims of a new political dawn and so on. I have my doubts. Whether mistaking a single-issue campaign for a new political movement is just wishful thinking or self-serving analysis is moot, really. The point is that it is a mistake.

The result of the referendum will not upend Irish politics radically, any more than it will “change the world” as some of the more hyperbolic repealer analysis had it.

But it will change Irish politics; it already has. The parties are scrambling for women candidates. The Social Democrats announced three women repealers as candidates only last week (the fourth is also a woman and has spent 10 years sailing around the world, if you don’t mind; then again, she is in Malahide).

“We have some very, very impressive women candidates,” a senior figure in the machine end of Fine Gael told me when we exchanged pleasantries on the way into Leinster House last week. All to the good; the calibre of the women in Leinster House is on average, higher than the men. Most of them have had to work harder to get there, I suppose.

Sixteen constituencies have no women TDs. You’d have to think that number will come down.

For the Government – and the next one – issues that resonate strongly with women will assume a greater importance. Legislation forcing companies to reveal their gender pay gap will be turbo-charged, I expect.

Do you think anyone in RTÉ gave serious consideration to putting Brendan Howlin in one of the TV debates?

All that may not be a new political movement which will remake a new politics in its image. But it’s not unimportant, all the same.

The referendum result has also altered the power balance between Fine Gael and Fianna Fáil in the larger party’s favour.

There’s a bit of hot talk in Fine Gael about capitalising on the referendum with a pre-summer general election, especially when they saw the party’s stratospheric numbers in the RTÉ exit poll.

There is little realism to it, though, tempting and all as Varadkar may find Micheál Martin’s difficulties and Fianna Fáil’s discomfiture. Just because you’d like to do something, doesn’t mean you should.

In passing, we might pause to reflect on what the referendum says about the plight of the Labour Party – now almost fully eclipsed by Sinn Féin as the third force in Irish politics, and consigned to being bit players in a campaign many of its members have backed for decades. Labour rages against the unfairness of this, but that doesn’t mean it’s not true.

Look at it this way: do you think anyone in RTÉ gave serious consideration to putting Labour leader Brendan Howlin in one of the TV debates? The jumping up and down looking for credit afterwards only underscored the point.

The referendum will not win an election for anyone on its own. We know that whatever their views, few enough people vote with abortion at the top of their list of priorities in a general election.

The election, when it comes, will be won on the issues people think of as most important – housing, health, the economy, currently viewed by many voters as a question on the cost of living – and who they think will address these problems most effectively.

Rather than heady party support figures, or the popularity of the leaders, what will matter most is how voters interpret these questions when faced with a group of aspirant local candidates looking for their votes.

Think about the last election: you could hardly say that Fine Gael won it. But Enda Kenny won the post-election process to form a Government.

As a result, Fine Gael now has a pretty good chance of forming the next government, an historic three-in-a-row that would confirm its replacement of Fianna Fáil as the natural party of government in Ireland.

By contrast, Labour declined to get on the pitch after the last election. Had it done so, it might now be taking the accolades directed at Simon Harris and Leo Varadkar, and looking to the next election with the confidence now oozing out of Government Buildings.