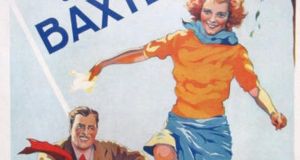 Gertrude Page’s novel Paddy the Next Best Thing (1908) inspired theatrical and film adaptations, including one of Fox’s biggest hits of 1933

A novel with an Irish setting written many years ago by an English author had a remarkable popularity in print, on stage and screen. Scenery of sloping fields, mountains and sea around Omeath and Carlingford Lough provided the background for a romantic story called Paddy the Next Best Thing.

It was written by the novelist Gertrude Page and published in 1908. Her name may be long forgotten but there have been frequent editions of her book since then.

Paddy is actually a vivacious girl, an irrepressible tomboy. Her father had been hoping for a boy-child but is delighted with his high-spirited daughter. It’s clear that she at first dislikes a wealthy man because she thinks he’s a neglectful land-owner.

There is a succession of lively exchanges between them. Her feelings are heightened because her elder sister Eileen was once keen on this man but he was not. interested. However, when he proves his worth and declares his affection, Paddy’s antagonism turns to love.

Meanwhile, her sister and another well-off man fall in love and his money helps to rescue the family’s indebted estate from serious debt.

It is not surprising that the principal characters belong to the landed gentry since Gertrude Page was married to a man whose relatives were of that class. Concern about their lands as well as the need for suitable marriages were part of their mindset.

She spent holidays with one of them, Leonard Dobbin, and his family, who lived in Drumullagh House in Omeath. He was an agent for a local landlord and belonged to a family prominent in the region, one of whom held extensive lands in Armagh.

By and large the book was an English person’s perception of Irish life and includes colourful locals intended to give the goings-on a flavour of thatched-cottage Ireland. However, it was a lively tale of romance without any social or political nuances.

It lent itself to dramatisation and was turned into a very successful long-running stage drama at the Savoy theatre in London in 1920.

This in turn attracted the attention of one of Britain’s leading film producers, Herbert Wilcox.

He came from an impoverished background and was not sure whether he was born in Cork or in London but he worked his way up to be an exceptional entrepreneur in the early British film industry.

With an eye to US distribution he brought over Mae Marsh, one of the brightest stars of the American silent screen, to play the role of Paddy. The film, made largely in a studio near London, was a success in Britain and the US in 1923.

Ten years later, when sound films had come into being, it was given a Hollywood-Irish treatment by Fox Films that can now be watched on the internet.

He orated in a broad brogue that would have been at odds with the speech of the father in the novel.

The film was seasoned with other dollops of stage-Irish dialogue. Incidentally the former Abbey actor JM Kerrigan had a role playing one of the local worthies.

Overplayed and artificial as it might seem today, it was one of Fox’s biggest hits of 1933.

Gertrude Page did not live to see the cinematic success of her book. Born in 1872 in the English Midlands to a prosperous family, she began writing novels in her teens and had written four or five without being able to get them published.

When she eventually had a breakthrough with one novel her publishers looked to some of her earlier work. This included Paddy the Next Best Thing.

In 1902 she married Alec Dobbin, and two years later the couple settled in Rhodesia, today’s Zimbabwe. After saving for 10 years they were able to buy a farm of 21,000 acres that they called “Omeath”. She suffered much ill-health and died in Rhodesia in 1922.

The house in Omeath where she holidayed passed into other ownership. It was destroyed by fire in 2007 and demolished. The site is now part of the Omeath Sewerage Scheme in Co Louth.

Meanwhile Paddy the Next Best Thing continues to be read in print and now in a number of e-book editions.