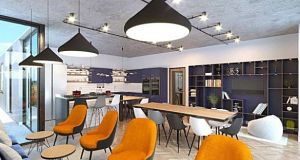 The argument that co-living developments could drive up land prices is valid, but is undermined by the 100 hotels under construction or in the planning process in Dublin. File photograph: The Irish Times

The JLL European Co-Living Index 2019 predicts that the European co-living sector is set to grow from about 6,480 operational beds in 2019 to 20,400 by the end of 2021. Yet, thanks to a de facto ban on co-living announced by Minister for Housing Darragh O’Brien Ireland will soon cease to partake in this evolution.

Alongside concerns about distorting land prices and disrupting the Government’s housing plan, this decision seems to be somewhat fuelled by preconceptions around what the Taoiseach has described as “glorified tenement living”.

Visit London, however, and you will see that this is far from the reality. The Collective is the biggest name in the UK’s co-living market, with two established developments in London. One is a 550-bed development in Old Oak, northwest London, and the latest is a 705-bed space in Canary Wharf.

The Canary Wharf site boasts amenities including a gym, swimming pool and spa, wifi, restaurant and bar, and a daily cleaning service. These facilities, and bills, are inclusive in the price of rent ranging from £1,100 (€1,220) to £1,400 per month.

A standard en suite room is 16sq m and includes a kitchenette. Each floor has a communal kitchen and living space, which residents say tends to be used for entertaining guests and socialising, rather than where everyone cooks their daily meals.

The Collective’s success in London is evident. At the beginning of the pandemic, it secured planning permission from Wandsworth Council for two new co-living developments – a 310-room site in Earlsfield and a 263-room site in Battersea, in the southwest of the city.

The Collective’s schemes in Old Oak and Canary Wharf were even cited as examples of successful co-living in the report for the minister for housing.

So why, if the concept is beginning to take off overseas, has Ireland suddenly banned it? One of Mr O’Brien’s main concerns around co-living is the location of proposed developments outside the core city centre. Given that these developments tend not to include car parking, this is a valid consideration.

London appears to have solved this issue without a ban, through a dedicated co-living planning policy. Policy H16 requires that the location must be accessible by walking, cycling or public transport and not contribute to car dependency. While London’s transport network is far more extensive than Dublin’s, this policy could still translate.

Co-living companies are now working with London’s councils to help alleviate pressure on temporary accommodation. The Collective promises to set aside some short-stay rooms to provide emergency accommodation for those who need it most. Its latest planned developments will also offer key workers discounts of up to 30 per cent of market rental levels.

A recent CBRE report on co-living cites affordability as a benefit of co-living, as it “creates a bridge for young adults wanting to leave home and pursue their careers in the city”. When bills and facilities are included, costs of co-living rents in London are typically lower than private renting. It also eliminates the risk of expensive agency fees or six-month deposits, both synonymous with Dublin renting.

The Irish report describes the demographic at whom co-living is targeted as “typically those at a stage of life where they have yet to accumulate significant possessions and a have shorter-term outlook with regard to choice of tenure”.

What are significant possessions? A wedding ring, perhaps? Or maybe a three-piece leather sofa set? Not all young adults today aspire to these traditional societal norms, and outright banning living concepts which may benefit this cohort of people seems rather unfair.

Something the report further fails to allude to is that this demographic, whom it claims are “more likely to be mobile”, is expanding thanks to the pandemic. A rethink in office culture will give people added flexibility, and working from home will remain a permanent fixture for many. A large communal workspace with fast internet included in the price of rent is apposite.

Most Irish graduates are entering the workforce from their bedroom desk or kitchen table, without getting the chance to meet their colleagues in person. Co-living could provide a social outlet for those who will continue to work from home, while possibly alleviating mental health issues in this demographic.

The argument that co-living developments could drive up land prices is valid, but is undermined by the 100 hotels under construction or in the planning process in Dublin.

As other European cities adapt to more modern housing solutions, Dublin may be left behind as a city rife with luxury hotels, scheming landlords and young professionals working from their childhood bedrooms.