Orna Mulcahy: We can all do with some poetry therapy

Where are the poems of my youth? When did ‘Soundings’ get replaced by a 3.5kg annual destined for landfill? 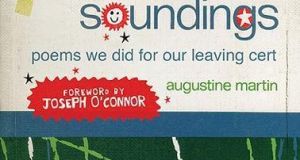 When did Soundings get replaced by this 3.5 kilo annual destined for landfill when the exams are over because it can’t be handed on since the next Leaving Cert year will have a different set of poems?

Poetry is not something that you can just suddenly dive into the minute you get home from work. “What is Elizabeth Bishop trying to say in this line here?” is a question you don’t want to face while still clutching a Leap card and foraging for dinner. The answer could be one thing or, more likely, something far deeper. But since it is early in the Leaving Cert cycle, I’m making an effort.

“Show me the poem,” I say, and am handed a huge flabby book called This Is Poetry. It’s 500 pages long but covers just eight poets. The poems are hard to find among the background and the foreground and the pointers and instructions. It looks like extremely hard work.

I’m sad to see that there are no heavens’ embroidered cloths or daffodils dancing in the breeze. No Kubla Khan. No Patrick Kavanagh. No Robert Frost!

I’m sad to see that there are no heavens’ embroidered cloths or daffodils dancing in the breeze. No Kubla Khan. No Patrick Kavanagh. No Robert Frost! Where are the poems of my youth? When did Soundings get replaced by this 3.5 kilo annual destined for landfill when the exams are over because it can’t be handed on since the next Leaving Cert year will have a different set of poems? The conversation moves away from the poem, Filling Station, and the student tries to move away from me, realising that my musing and fuming are going to be no help.

She doesn’t rate Elizabeth Bishop and I don’t want to compound the old codger behaviour by saying, “just wait, wait a few years, and you might like it”, for fear of sounding like my grandmother who was forever talking in verse at us and could give you reams of Paradise Lost at the drop of a crochet stitch.

In particular, she loved Victorian classics. “The boy stood on the burning deck...” was a favourite, along with a certain dear doll that was lost in a field and found again a long time later, all trampled by cows but still just as lovely. I was dubious about these poems but lived in hope that a doll that had gotten lost in a house move would turn up one day even with her looks gone. Why didn’t that poor boy save himself and jump when he had a chance, we asked, wondering if we’d be expected to make a similar sacrifice one day.

Granny knew many more poems (Palgrave’s The Golden Treasury had been a constant companion) but the way she recited the doll poem was particularly sweet and mournful. By then she was living with us in Dublin away from her home in Monaghan and what she was regretting, I think, was the loss of the fields that had surrounded her and the trampling cows.

I searched This is Poetry (in vain) for my favourite Elizabeth Bishop poem, One Art, which makes my scalp prickle. It’s about losing things, keys, houses, people and it comforted me at a time when I was losing things and people.

At the same time, myself and Gemma Tipton ran a Culture Night event on Merrion Square, called Downstairs Dublin, which involved staging unlikely events in the basement yards in front of the big houses. On a bit of a whim, 41 Merrion Square was designated the Poetry Therapy basement. It was a dank little yard where we laid down a rug and some rickety café chairs and persuaded the poets Enda Wyley and Geraldine Byrne to sit talking to people about their feelings, then handing them a rolled up poem that best matched their mood.

The poems had been selected with great care by Poetry Ireland but we wondered if anyone would come given the competing attractions nearby – free food in one basement, free books in another, free massages right next door. But in fact people queued all evening for Poetry Therapy and when the poets were exhausted, colleagues stepped in to lend an ear and hand out poems. People cried. Colleagues cried. There weren’t enough poems to heal all the pain on Merrion Square that night.

Downstairs Dublin is no more but we often talked of doing something about Poetry Therapy but it seems someone else had been doing it already and for years. William Sieghart is an English writer and broadcaster who started out nearly 20 years ago posting poems in unlikely places around London so that people could read them from buses.

It was a guerrilla tactic, he says, confronting people with a poem that would startle them, but might also help them in some way. He called it “the poetry pharmacy” and it grew through the literary festival circuit and on BBC Radio 4 where he has dispensed poems on a one-on-one basis and compiled anthologies of heart-healing poems. Now he has just started a column in the Sunday Telegraph called The Poetry Pharmacist.

The first poem he recommends, for the condition of “need for reassurance, but also suitable for anxiety, depression and fear in general”, is one by Derek Mahon called Everything is Going to be Alright and here are a few lines from the end of it to send you on your way. “The sun rises in spite of everything/and the far cities are beautiful and bright./I lie here in a riot of sunlight watching the day break and the clouds flying./ Everything is going to be alright.

1 Corey Taylor: After 20 years in Slipknot we are all beat up
2 Housing crisis: Seven solutions to Ireland’s biggest problem
3 Owen Doyle: Creeping professionalism of schools rugby a threat to the game
4 Asylum claims by Georgians and Albanians brought to abrupt halt
5 Cosgrave should give his speech to Web Summit’s partners in Saudi Arabia
Real news has value SUBSCRIBE