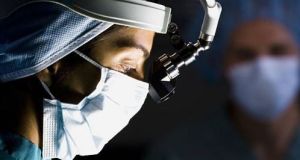 “We must engage with prospective students while they are still at school, breaking down the notion that surgery is a predominantly male choice.” File photograph: Getty Images

The fact that just 7 per cent of our consultant surgeons are women is a striking and unacceptable statistic in modern Ireland. It is all the more striking when you see that 34 per cent of core surgical trainees are women, and that more than half of medical graduates are female.

There is clearly something about the way we train and treat surgeons in Ireland that has ensured our operating theatres stubbornly remain a male domain.

We have had 20 years of gender parity among medical graduates. What happens to all of those highly intelligent, capable and trained young women between graduation with a primary degree, and arrival at the top of the surgical profession?

In 2016 we at RCSI decided to find out. We set up a working group on Gender Diversity in Surgery which has reported recently. The working group was set up in late 2016 and was chaired by a member of the RCSI Council, Deborah McNamara.

Of course we have work to do ourselves in RCSI before lecturing anyone on gender diversity: 17 of our 21 council members are men, and 89 per cent of our court of examiners is male. We are doing better than the surgical profession itself, but we clearly need to do a lot more.

You ask a woman, ‘Can you run for office?’ Her question is, ‘Really? Why me? Do you think I’m good enough? Are you sure?’

Traditionally, the RCSI is a powerful voice in setting standards and influencing surgical culture in Ireland. But the lack of gender diversity is a major failing within that culture.

The working group made drearily familiar findings. Working conditions for surgeons during pregnancy are not good, the supports available to those returning after periods of leave are not good enough and the access of female Fellows to high quality surgical fellowship training should be improved. We need career structures that allow surgeons to vary the tempo of their professional life to better meet the needs of parents.

Female medical students tend to underestimate their own abilities, as women do in many other walks of life. Canadian prime minister Justin Trudeau, a pioneer of gender equality in politics, has famously remarked: You ask a man, ‘Do you want to run for office?’ His first question is, ‘When do I start?’ You ask a woman, ‘Can you run for office?’ Her question is, ‘Really? Why me? Do you think I’m good enough? Are you sure?’”

The same self-underestimation may well be leading female medical students and newly qualified doctors to opt out of even considering a career in surgery.

There are practical reasons why growing the number of women in surgery is important. Evidence from other sectors says it will result in better decision-making. There is evidence suggesting male and female doctors practice differently. It says women follow clinical guidelines and make evidence-based decisions more consistently than men. There also seem to be better survival rates among elderly patients in the care of female practitioners.

We men may have some advantages too. The point is that a diverse surgical profession will include the diverse range of human attributes, and better meet the needs of patients and of society.

We need to knock on the head forever the assumption that if you have children as a young trainee or surgeon, you will be left behind or overtaken in your career progression

There are four areas that need attention.

Firstly, many women opt for non-surgical hospital-based specialities such as microbiology and radiology. Others opt for general practice. These are all fine options. But the evidence is that at least some women choose these options because there are aspects of surgical training that put them off.

We must engage with prospective students while they are still at school, breaking down the notion that surgery is a predominantly male choice.

Secondly, once women are in surgical training, we will work to ensure gender neutrality in what may currently be male-oriented training processes and standard operating procedures. We need to knock on the head forever the assumption that if you have children as a young trainee or surgeon, you will be left behind or overtaken in your career progression.

Thirdly, surgical training posts will be allocated more than 12 months in advance, and should be for a duration of 4-6 years, giving trainees an opportunity to plan a life that balances career with family responsibilities.

Finally, we recommend measures to ensure female surgeons have equal access to high-quality surgical training fellowships, which are typically in other EU countries, the US an the UK and often occur when a surgical trainee may be considering starting a family. Such fellowships must recognise this. The striking absence of female surgeons in senior surgical academic posts in Irish universities must also be addressed. Research funding to support the career development of female academic surgeons would greatly support that.

John Hyland is President of RCSI

1 Cancellations and confusion as coronavirus threat edges closer
2 Coronavirus: What we know so far about how Ireland is affected
3 Life as a Facebook moderator: ‘People are awful. This is what my job has taught me’
4 ‘I woke up the next day in a guy’s house covered in bruises’
5 Cavalier approach to data retention is long-standing
Real news has value SUBSCRIBE