More than one in five Germans voted for populist, anti-establishment parties. 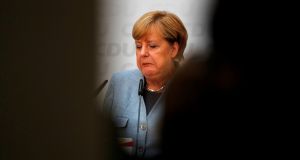 For the past year, as the hurricane of political populism shook the west, Germany remained an island of calm. The US elected Donald Trump; Britain plunged towards Brexit; François Hollande was too unpopular even to stand for re-election as France’s president. By contrast, Angela Merkel, moved serenely towards a fourth term as German chancellor. Among the large western nations, only Germany seemed to have strong and stable leadership.

This weekend’s elections ensure that Ms Merkel has indeed secured another term in office. But the other, less comforting, development is that Germany has lost its immunity to angry, anti-establishment populism. That has serious implications for the German chancellor’s ability to play the role of “leader of the western world”, a title that many bestowed on her after the election of Mr Trump.

The big story of the German election is clearly the rise of the nationalist right, in the form of Alternative for Germany, which scored over 13 per cent of the vote and will be the third-largest bloc in parliament with more than 90 MPs. Sigmar Gabriel, Germany’s foreign minister, has argued that with the AfD in parliament “we will have real Nazis in the German Reichstag for the first time since the end of the second world war”. Most analysts do not go that far. But other far-right politicians in Europe certainly regard the AfD as a sister party. Marine Le Pen, leader of France’s National Front, was quick to congratulate the German party on its electoral success.

The rise of the AfD is part of a bigger shrinkage of the political centre. The main centrist parties - the chancellor’s Christian Democrats and the centre-left Social Democrats - scored their worst results since 1949. With the far-left party, Die Linke, getting just over 9 per cent of the vote, more than one in five Germans voted for populist, anti-establishment parties.

That level of populist support is still well below the substantial proportion of voters (nudging 50 per cent in each case) who elected Mr Trump, delivered Brexit and opted for far-right or far-left candidates in the first round of the French presidential election. But the strong showing of the populists, and particularly the AfD, puts an end to the fond hope that the “burden of history” means that Germany is immune to extremism. On the contrary, many German observers were shaken by the undercurrent of anti-establishment rage revealed by the election campaign. At many of her rallies, Ms Merkel was drowned out by jeering and whistling, a new development in German politics.

The AfD has become increasingly radical with the passage of time. The group originally emerged as a “professors’ party” of conservative intellectuals angered by Germany’s participation in eurozone bailouts. But the refugee crisis of 2015, which saw more than 1 million asylum seekers, mostly Muslims, enter Germany gave the AfD the opportunity to remake itself as an anti-immigration party.

More recently, the AfD has begun to play with the most incendiary material in German politics - the country’s Nazi history. Alexander Gauland, the party’s co-leader, has said that Germans have a right to be proud of its soldiers in both world wars. In leaked emails, Alice Weidel, the AfD’s other lead candidate, called the German government the “puppets of the victorious powers of the second world war”.

The presence of a rightwing nationalist party in the Bundestag will change the tone of German politics. It could also complicate the way Germany interacts with the rest of Europe, putting pressure on the government to take more nationalist positions.

Germany already has very difficult relations with both Turkey and Poland. Recep Tayyip Erdogan, the Turkish president, has accused the German government of “Nazi practices” for blocking Turkish political rallies on German soil. The Polish foreign minister has suggested Germany should pay his country up to $1 trillion in reparations for the second world war. Rising above insults from abroad will become harder, with a nationalist bloc in parliament demanding that the government stand up for Germany. That also raises the danger of relations between European nations taking on an increasingly harsh tone.

Hopes for deeper European integration to counter the nationalist tide and improve the workings of the EU may also now be put on hold. The French government had hoped that a re-elected Ms Merkel would take bolder steps towards eurozone integration. Emmanuel Macron, the French president, intends to set out his ideas in a speech in a few days’ time. But the new political landscape in Germany will make it harder for Ms Merkel to respond positively to French overtures.

The rise of populism highlights the fact that many German workers feel that their living standards are being squeezed, which makes its harder to make the case for generosity towards southern Europe. The need to incorporate the Free Democrats into a new governing coalition will also make concessions to France difficult. The FDP, once champions of European integration, are now a strongly Eurosceptic party.

A fourth term in office is a personal triumph for Ms Merkel. But she has paid a price for her policies on refugees and the euro. Germany now looks more like a “normal” western country. And that, ironically, is not something to be welcomed.

Gideon Rachman is an FT columnist