Noel Whelan: Brexit has become a diplomatic dialogue of the deaf 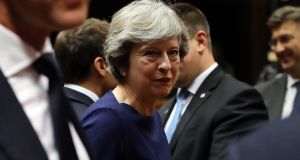 The ineffectual politicians in ‘The Thick of It’ look almost competent compared with Theresa May. Photograph: Dan Kitwood/Getty Images

In an interview some months ago with Seth Meyers on The Late Show in the United States, David Mandel, the executive producer of the hit comedy Veep, spoke of how he and his scriptwriters use to sit down and try to come up with some of the craziest, most stupid things a president could do but could never have imagined some of the things President Trump would do in his first 100 days.

The satirist Armando Iannucci spoke in the same vein in an interview with Ryan Tubridy on Thursday. Iannucci is the genius behind the Channel 4 political comedy The Thick of It. He told Ryan that if he had been presented with a script saying that letters would fall off the backdrop behind the prime minister while she coughed her way through her party conference speech, as happened to Theresa May recently, he would have rejected the script as “just too stupid and unbelievable”.

Iannucci noted how real-life politics in Britain is now both frightening and funny at the same time. Indeed the ineffectual politicians depicted in The Thick of It look almost competent compared with Theresa May in her current predicament.

The mess in British politics is far from entertaining for those watching from the sidelines in Ireland. We cannot enjoy it because ultimately the joke that is the Brexit negotiations will be at our expense.

The European Council meeting in Brussels was to be the occasion they hoped would give the go-ahead for the second phase of Brexit negotiations. The first phase has been focusing on the rights of citizens of the other 27 member states in the United Kingdom and of UK citizens in the other member states; the settlement of the UK’s financial obligations; and ensuring the Northern Ireland peace process is not compromised. Questions about the future relationship between the UK and the European Union after it leaves are to be the subject of the second phase.

The division of the topics into these two phrases is a somewhat artificial and of itself an is an impediment to a successful outcome. No family lawyer would ever think it wise or useful to finalise the terms of the divorce without simultaneously negotiating how the separating spouses would interrelate after the break-up and what would happen to the children.

There is clearly an advantage from the Irish perspective of having Northern Ireland – or at least aspects of the Northern Irish issue – included among the phase-one topics, but in reality little has or could be advanced on Northern Ireland overall in isolation from the question of what the UK’s relationship would be with the customs union and the single market after it leaves the EU.

There has been clarification now that the common travel area – allowing for free movement of people between Ireland and the UK – will continue. That, however, was always going to be the easiest issue on the Irish checklist to resolve. There has been no progress, however, on what kind of Border will be on the island, and there cannot be until issues of trade and customs are resolved. The reality is that it will remain unresolved until the very last stages of these Brexit negotiations.

More than six months after the Brexit process was formally triggered, we have not advanced much beyond a diplomatic dialogue of the deaf. The Irish Government and Northern Ireland’s politicians speak of the need to explore some kind of special status for Northern Ireland. They do so knowing that for constitutional and political reasons, there is no real prospect of the British government agreeing to any such status.

In London, Dublin and Brussels, official and political voices do a disservice to both the use of language and public understanding of the negotiations by merely repeating mantras such as “There must be a frictionless Border” and “There can be no return to the borders of the past”. It is as if by merely chanting such phrases over and over again, they can make it happen. Restating that the Dublin Government doesn’t want a hard Border, that the London government doesn’t want a hard Border and that the EU does not want a hard Border cannot simply magic that prospect away.

The whole process of these Brexit negotiations is slipping now from comedy to fantasy.