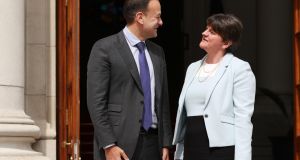 Taoiseach Leo Varadkar and DUP leader Arlene Foster: Existing arguments over a Border poll are due to ambiguity in the agreement, so adding further doubt only makes matters worse. Photograph: Nick Bradshaw

Leo Varadkar has torn up the Belfast Agreement in unionism’s favour and ended up doing nobody any favours.

With no such result in a Border poll ever likely, it is “better to focus on making the agreement we have work,” Varadkar concluded.

The exact figures in the 1998 referendums were 71.1 per cent in the North and 94.4 per cent in the South. Varadkar seems to have forgotten about the Southern vote, while describing the Northern result as “cross-Border”. He presumably meant cross-community.

The 71.1 per cent figure was just enough to infer support from majorities of unionists and nationalists in Northern Ireland.

Governments and pro-agreement parties were unable to resist claiming consent from both communities.

This opened the door to countervailing claims from the DUP, which wanted to portray the agreement as lacking unionist consent, plus certain nationalists and republicans, who wanted to portray unionists as irredeemable.

Before long a dangerous new argument had developed around the legitimacy of the peace process, yet it was all completely unnecessary. There was never any requirement for dual consent in the 1998 referendum and this was perfectly understood by everyone as they went to the polls.

What Varadkar seems to have been attempting is a spirit before letter stance on the agreement. The problem with invoking spirits, as the consent argument shows, is that everybody sees what they want to see and nobody knows how it might haunt them later.

If a debate from 1998 escapes the youthful Taoiseach, Brexit provides an up-to-date demonstration.

British departure from the EU, even on the hardest terms imaginable, will have precisely no effect on the letter of the agreement. This has been established conclusively by the highest courts in Northern Ireland and Britain – and there is no reason to think the Irish Supreme Court would find differently.

However, nationalist Ireland has latched on to the idea that Brexit breaches the spirit of the agreement and indulgence of this notion for various political purposes has created its own extremely challenging reality.

Had the Irish Government decided to focus on the letter of the agreement, it would have insisted on engaging with London over Brexit via the North-South and east-west bodies set up after 1998 precisely for such a purpose – ironically, at great nationalist insistence – but since allowed to wither amid unionist contempt.

Instead, Varadkar’s predecessor Enda Kenny set up a unilateral all-Ireland Brexit forum, where nationalists prayed to the spirit of an agreement they were ignoring then and there in the letter, earning even more unionist contempt.

At least Brexit has the potential to be a passing calamity. Its economic cost will be hard for individuals to discern, its Border problems boil down to checking paperwork and anyone who would let a bomb off over this is committed to letting bombs off regardless.

The agreement’s mechanism for a Border poll is a very different spectre.

For nationalists, it is both the point and the end-point of the agreement, which in turn is the de facto constitution of Northern Ireland.

Unpicking it risks open-ended uncertainty and chaos for everyone.

Existing arguments over a Border poll are due to ambiguity in the agreement, so adding further doubt only makes matters worse.

Put the text under a microscope, not on a Ouija board

A Border poll may only be called “if at any time it appears likely” to the secretary of state for Northern Ireland that nationalists would win. This is all the agreement says, exposing republicans to ridicule from dissidents and eventually leading to Sinn Féin’s present demand for a speculative Border poll – unlike Brexit, a literal breach of the agreement.

The agreement also specifies that polls can be held no more than every seven years. Originally a unionist condition to stop nationalists demanding a poll every year, it has since been portrayed by republicans as a countdown to unification and thrown back in unionism’s face.

Belfast-based victims campaigner Raymond McCord has brought a judicial review into how a Border poll should be called, saying he wants to remove the “fear factor” arising from lack of clarity.

This is the correct approach to making the agreement work – put the text under a microscope, not on a Ouija board.

The relevant text for the point Varadkar apparently wants to make is the requirement to hold Border polls concurrently North and South.

The Taoiseach could simply say he would not advocate a unification vote in the South without meaningful reconciliation in the North.

That would place a positive obligation on republicans, instead of stoking negative fears.

It would have the added advantage of meeting the letter and spirit of the agreement.