Noel Grealish’s views of asylum seekers are based on myth 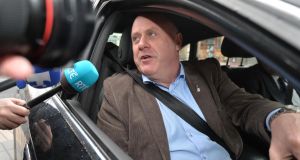 Noel Grealish: recent comments about a proposal to open a direct provision centre in Oughterard highlight the negative impressions many people have about asylum seekers. File photograph: Alan Betson

The recent comments by TD Noel Grealish about a proposal to open a direct provision centre in Oughterard, Co Galway, highlighted the negative impressions many people have about those who come to Ireland as asylum seekers.

Unfortunately, they also highlight that much of the controversy around asylum seekers is driven by myths and misinformation. As a solicitor practising in this area, I regularly hear claims that I can state from both knowledge and experience are simply untrue. It’s time to explode some of these myths, and set the record straight about asylum seekers in Ireland.

Myth No 1: The high refusal rate shows that most asylum seekers are “bogus”
In order to receive a declaration of refugee status, an applicant must show that her fear of persecution stems from a Refugee Convention ground: race, religion, nationality, political opinion, or membership of a particular social group. A person can face a genuine threat to their life, but if it is not based on one of these categories, their claim must be refused.

Subsidiary protection status removes the need to fit into a convention ground, and also applies to people fleeing indiscriminate violence in conflict – but even so, it can be refused to people with genuine claims. If the country of origin has a functioning police force, for example, the applicant may be refused on the basis that state protection is available. In practice, however, this may mean no more than that if the threat materialises and you are murdered or tortured, your assailant will be brought to justice.

A few cases I have dealt with that show how high the bar is include: a man who had a leg cut off with a chainsaw; a practising Christian from an Islamic country that executes “blasphemers”; and an Iraqi who was refused on the grounds that Kurdistan was “safe”, at a time when the Isis front line was within an hour’s drive. Whether these applicants were rightly or wrongly refused international protection, one can hardly doubt their reasons for seeking it.

Myth No 2: They were supposed to seek asylum in the first country they entered
The Refugee Convention dates from 1951, before the era of mass plane travel. If asylum seekers were obliged to remain in their first country of entry, few would have ever made it to western Europe or North America. (In fact, even today most don’t: in both absolute and relative terms, the largest refugee populations are found in African, South Asian and Middle Eastern countries.)

Many people mistakenly believe that the Dublin Regulation requires asylum seekers to apply in the first EU member state they reach. However, the Dublin Regulation places duties on states, not on applicants. In some – not all – cases, a member state may be deemed responsible for processing the application of a person who passed through its territory. But there is no rule that obliges someone to just stay there and apply in the first place.

Myth No 3: They are only coming here for the social welfare
This was the accusation made by Grealish, who claimed that asylum seekers were only here to “sponge off the system”. How, I wonder, has he missed the campaign led by the Movement of Asylum Seekers in Ireland for the right to work and an end to direct provision?

One of the questions I am asked most frequently by my asylum-seeking clients is whether they can avail of the limited labour market access granted to some applicants under the EU Reception Conditions Directive. Those who are excluded due to the current stage of their application – or who cannot find work because of the significant restrictions Ireland has imposed, such as granting the permission for six-month periods only – are invariably frustrated and unhappy at having to continue to depend on their asylum-seeker allowance instead of being allowed to support themselves.

Sometimes non-European Economic Area (EEA) migrants who are here on valid residence permissions come to me because they are considering seeking asylum. If the benefits were as attractive as people such as Grealish claim, I would have many more such clients. Most of them, however, choose to do so only as a last resort. For all the scaremongering about these benefits being a “pull factor”, those who are actually faced with the prospect of having to live in direct provision on €38.80 a week know how profoundly disempowering it is.

The protesters in Oughterard, and their supporters, insist that they are not racist or xenophobic. Some are (justifiably) taking the position that both the centre’s residents and the local community would be ill-served by relocating so many people to inadequate accommodation in this remote and under-resourced town. Others say they are simply calling for more debate. But misinformation is a toxic ingredient in debate and these myths, if left unchallenged, will only contribute to misinformed public policy.

If there is to be a debate on how Ireland responds to its international obligations towards people seeking protection, our politicians and media have a duty to ensure it takes place in a context where claims like these will be fact-checked and falsehoods exposed. It is not enough to merely report what Noel Grealish says or ask him to “clarify” his comments – it must be shown that he is wrong.

Wendy Lyon is a partner with Abbey Law