The Irish Times view on the war in Syria: the world must not forget 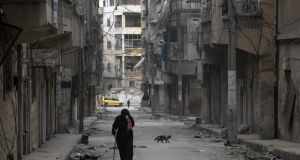 A woman walks down a street in Ariha, in Idlib Province, Syria, on March 12th. Ariha is mostly deserted, the smashed buildings and shrapnel scars on walls clear signs of the heavy aerial bombardment and artillery fire over the last several weeks. Photograph: Tyler Hicks/The New York Times

‘I feel everything has ended, and this is a final migration, not displacement. I feel let down by the world.” So says one of the million opponents of the Syrian regime now forced into Idlib and expecting a final assault from Syrian and Russian forces who have captured most of the north-eastern province and surround the city’s three million inhabitants.

“There is nothing now, nothing at all”, says another civilian there. A 16-year-old youth explains: “Every time we hear a missile, we don’t know where to hide”.

This week’s 10th anniversary of the Syrian war finds the city still experiencing a Russian-Turkish ceasefire which has temporarily stopped the remorseless advance of regime forces on this final battlefield.

Nobody expects the fighting to stop before Idlib falls; yet if and when that happens it seems likely to become the conflict’s bloodiest episode.

The Idlib region has been the most determined centre of opposition to Bashar al-Assad’s regime and its population is now swelled by those who have fled there from elsewhere in the country rather than surrender to his forces.

They are not wanted in Turkey, which already hosts 3.5 million Syrian refugees, nor among the country’s other internal and external displaced people, some 50 per cent of its population in all.

A world suddenly preoccupied with the coronavirus pandemic as an existential threat must not forget this other imminent threat to its civilised values in Idlib.

The Russian-Turkish ceasefire symbolises how the war became internationalised along with its national intransigence.

Idlib’s civilian population is fully entitled to feel let down by the rest of the world as it faces into a final lethal battlefield without any indication that international diplomacy can head off such a calamity.

There is still scope and time for the European Union to redouble its efforts to head off a bloodbath that will send so many desperate people to seek refuge here if it happens.