Living in the dark shadow of the Battle of Solferino

An Irishman’s Diary: Geneva Convention and Radetsky March are part of its legacy 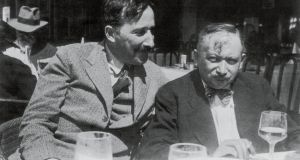 Exiled in Paris, Joseph Roth foresaw the grim future, writing to his friend and benefactor Stefan Zweig: ‘It will have become clear to you now that we are drifting towards a great catastrophe.’ Photograph: Getty Images

If you’ve read Joseph Roth’s great novel The Radetsky March, as I finally got around to doing recently, you’ll know it begins with a fleeting incident during the Battle of Solferino in 1859.

A lieutenant of humble birth throws himself into the path of a bullet bound for the Austrian emperor, thereby becoming the “Hero of Solferino”, whose feats will be exaggerated by school history books for decades to come.

This sets the scene for a saga that follows three generations of his family – accidentally elevated but also doomed (like the empire itself) – as they head towards the disaster of 1914.

Apart from the battle’s role in establishing modern Italy, Solferino made history for at least two other reasons.  One is that it was the last major conflict in which all participating armies were led in person by their monarchs. The other is that it resulted in the founding of the Red Cross.

Roth lived in the shadow of another curse well known to writers, alcoholism

Maybe that helps justify one of the more memorable literary flourishes in Roth’s classic: “In the years before the Great War, at the time the events chronicled in these pages took place, it was not yet a matter of indifference whether a man lived or died.”

That may have been an exaggeration, born of the disillusioned 1920s and 1930s in which he was writing.  But the death-toll and sufferings of the maimed at Solferino was certainly not a matter of indifference for those who witnessed the aftermath.

They included Henry Dunant, a Swiss businessman who was in the town of Solferino on the day of the battle and later toured the site, horrified at the thousands of wounded, most of them untended and many begging for bullets to finish them off.

Having first supervised relief teams from the local civilian population, he then went back to Geneva, wrote a memoir of his experiences, and used the book to promote the idea of a neutral organisation that would henceforward look after those wounded in war.

The embryonic body met for the first time in 1863, and Dunant’s campaign also led soon afterwards to the Geneva Convention on treatment of prisoners.

Political rivalries subsequently marginalised his role.  That and bankruptcy made him a forgotten figure until a profile in a Swiss newspaper revived his memory in the late 1890s, just in time for him to become the first recipient (jointly with a French economist) of the Nobel Peace Prize.

Roth had very mixed feelings about his Jewishness.  He had no enthusiasm for the religion, and politically he thought Zionists were as bad as Nazis

He died in 1910, but his birthday – May 8th – is now celebrated annually as international Red Cross (or Red Crescent in Islamic countries) Day.

Although the Battle of Solferino, and its hero, are both dispatched in chapter one of Roth’s novel, they haunt the rest of his book in the same way that the decline and fall of the Hapsburg empire haunted the author’s life.

He was born in its twilight years, when the Austro-Hungarian joint monarchy could still for example be seen as the model for a solution to the British-Irish problem, as Sinn Féin proposed in 1905.

Roth was meanwhile growing up near what is now the border between Ukraine and Poland. But the Austrian empire was the only entity to which he ever felt a belonging, and after its disintegration in 1918, he was psychologically homeless for the rest of his life.

This explains the nostalgic tone of The Radetzky March, although his plight was also complicated by Jewish birth.  After years of working as a journalist in Germany, he had to flee the rise of Hitler in 1933.  Exiled in Paris, he foresaw the grim future, writing to his friend and benefactor Stefan Zweig:

“It will have become clear to you now that we are drifting towards a great catastrophe.  Quite apart from our personal situations – our literary and material existence has been destroyed – we are headed for a new war. I wouldn’t give a heller [a German halfpenny] for our prospects.”

Roth had very mixed feelings about his Jewishness.  He had no enthusiasm for the religion, and politically he thought Zionists were as bad as Nazis.  He had also long harboured ambitions to become a Catholic and may even have done so at some point.

Whether this would have saved him from the coming horrors, however, is an academic question.  Roth also lived in the shadow of another curse well known to writers, alcoholism.  His last work was a novella, published posthumously, called The Legend of the Holy Drinker.  He had researched it too well. Although aged only 44, he was in ruinous health and died soon afterwards, in May 1939.