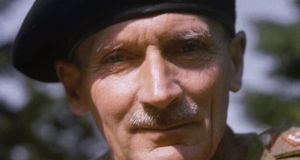 Bernard Montgomery: the future field marshal served as a brigade major tasked with subduing Cork, a place that had become the crucible of the War of Independence

In January 1921, an ambitious British army officer arrived in Cork with a view to subduing a place that had become the crucible of the War of Independence.

The ambush at Kilmichael in which 16 Auxiliaries had been killed by Tom Barry’s men occurred just five weeks previously.

This was followed by episodes that disgraced the name of the Crown troops in the eyes of the world – the burning of Cork by the Auxiliaries on December 12th and the shooting dead of Catholic priest Canon TJ Magner and 19-year-old Tadhg Crowley three days later.

Maj Bernard Law Montgomery was sent to Ireland as the brigade major of the 17th infantry brigade which had seven battalions stretched across the south of Ireland.

Montgomery’s family was Anglo-Irish. His family roots were in Moville, Co Donegal. His father, the Rev Henry Montgomery, was the Bishop of Tasmania, and Bernard spent his formative years from two to 14 in Australia.

His father was frequently absent on missionary duty during these years leaving Montgomery and his siblings to be raised by his mother – a deeply unhappy and occasionally violent woman.

“Certainly I can say that my own childhood was unhappy,” he wrote in his memoirs. He drew conclusions from his childhood which he would carry with him for the rest of his military career. Life was a fight. It was kill or be killed, suffer or inflict suffering.

“My own view is that to win a war of this sort, you must be ruthless,” he wrote in a letter to Maj Arthur Percival of the Essex regiment.

“Oliver Cromwell, or the Germans, would have settled it in a very short time. Nowadays public opinion precludes such methods, the nation would never allow it, and the politicians would lose their jobs if they sanctioned it.”

He was almost killed in the early stage of the first World War and rose up to be a temporary lieutenant-colonel at just the age of 30 by the end of the war.

Montgomery knew Ireland well. When his family returned to Britain, they spent summers at New Park in Moville. He retained an affection for Ireland, but not for Irish nationalism.

His perceptions of Ireland were doubtlessly coloured by the killing of his cousin Lieut-Col Hugh Montgomery by the IRA on Bloody Sunday 1920 at 28 Pembroke Street in Dublin.

Montgomery’s short time in Ireland marked an escalation in the war as both sides fought themselves to a standstill in Cork. British forces killed 33 IRA men in February 1921 and lost 23 men of their own. On February 20th, 1921, 14 IRA men were killed at Clonmult, east Cork.

Montgomery, with his usual rigorousness, produced a set of comprehensive instructions for all British officers serving in Ireland, emphasising a disciplined approach to operations within the law, but his own pronouncements afterwards suggest he was happy to set aside such niceties if necessary.

“It never bothered me how many houses were burned. I regarded all civilians as Shinners and I never had any dealings with them,” he wrote to Percival.

Nevertheless, he reached the same conclusion as British prime minister David Lloyd George that a military solution could only ever be temporary and that a political solution was the only one that would endure.

In his memoir published in 1958, he looked back on his time in Ireland with mixed feelings. “In many ways this war was far worse than the Great War which had ended in 1918. It developed into a murder campaign in which, in the end, the soldiers became very skilful and more than held their own. But such a war is thoroughly bad for officers and men; it tends to lower their standards of decency and chivalry and I was glad when it was over.”

Yet his second World War activities could have been radically different, according to his own memoir.

At the time of Britain’s moment of peril in 1940, Winston Churchill cast around for a morale-boosting victory that would distract from the seriousness of the situation. At the time Monty commanded the 3rd Division, the only one available for combat.

Two options were considered: the Azores owned by neutral Portugal and then Ireland.

“I was told to prepare plans for the seizure of Cork and Queenstown in Southern Ireland so that the harbour could be used as a naval base for the anti-submarine war in the Atlantic. I had already fought the Southern Irish once, in 1921 and 1922, and it looks as if this renewed contest might be quite the party with only one division. It seemed curious to me that anyone in his senses could imagine that, at the time when England was almost defenceless, the Prime Minister would allow to leave England the only division which was fully equipped and fit to fight in battle.”