The 17th president of the US had a gift for demagoguery 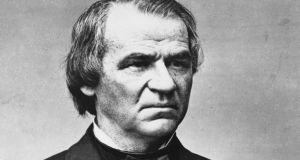 Andrew Johnson: it has been generally accepted that he was among the worst holders of the office of US president

He had been a polarising president, cherished, as well as deplored, for his excitability, his stubbornness, and his gift for demagoguery. His hair-trigger sensitivity to slights made him self-pitying and prone to a corrosive paranoia. He railed against establishment elites and gave succour to white supremacists. He rejected congressional oversight and barrelled forward, declaring that he could hire and fire whomever he wanted, even as his impetuous dismissals drew complaints that he was obstructing justice.

This is a description by Brenda Wineapple of the first US president to be impeached in her book The Impeachers, published in the United States recently.

Her subject was Andrew Johnson, the 17th president of the United States who held office from 1865 to 1869. His grandparents emigrated to America in the 1760s from the small village of Ballyeaston in East Antrim, as part of the great flight of Ulster Presbyterians.

He was born in a two-room shack in North Carolina on December 29th, 1808. Both his parents, Jacob and Mary, were illiterate, and Andrew himself never went to school. He did not master reading and writing until he was in his early twenties. “You don’t need to know how to read or write to be president of the United States,” he once famously said.

As a teenager he was apprenticed to a local tailor but after a few years he ran away and eventually ended up in Tennessee.

He established a successful tailoring business in the small town of Greenville and married 16-year-old Eliza McCardle, the daughter of the local shoemaker, whose people had emigrated from Co Tyrone. They prospered and raised a family and even owned a few slaves. Eliza helped Andrew with his reading and writing and even taught him basic mathematics.

Johnson became a gifted public speaker and was soon championing the interests of the mountaineers (the Hillbillies) and small farmers against the landed classes. He served in the House of Representatives in Washington for 10 years, and in 1853 he became governor of Tennessee. In 1856 he was elected to the US Senate. Alone among his fellow Southern senators, he vehemently opposed the secession of the Southern states.

When Tennessee seceded in 1861, he remained in Washington. His loyalty to the Union was rewarded in 1864 when Abraham Lincoln selected him as his running made on the winning presidential ticket. Less than a year later Lincoln was assassinated and Johnson became an accidental president.

He proved inadequate to the task of reconstructing the nation after the Civil War and was unable to handle Congress.

Johnson was a white supremacist. “This is a country for white men,” he declared, “and as long as I am President it will be governed by white men.”

When he fired his secretary for war, Edwin Stanton, in 1868 the House voted by 128 to 47 to impeach him for violating the Tenure of Office Act but he survived the subsequent hearing in the Senate by a single vote.

Johnson failed to win the Democratic nomination for re-election and retired to Tennessee.

He had one final distinction. He became the only former president to be elected to the Senate in 1875. He died four months later.

Apart from his ineffective leadership on the home front, Johnson took little interest in foreign affairs.

His disinterest allowed his secretary of state, William Seward, to act almost as an independent government. With scant reference to the White House, Seward negotiated a deal to acquire the vast territory of Alaska from Russia in 1867 for $7.2 million, or about two cents an acre.

Seward also gave aid to the Mexican government-in-exile, resulting in the occupying French forces being driven out of the country. He tackled the thorny problem of relations with Britain, which had been fraught since the end of the War of Independence in 1783, and laid the foundations of the friendly relationship which continues to this day.

One of these achievements alone would have enhanced the personal standing of any president but Johnson’s lack of involvement meant they were never associated with his tenure of office.

American scholars often argue about who contends for the title of the worst – or best – president in history. There may be a new candidate in the field soon. Over the years it has been generally accepted that Johnson is among the worst holders of the office.

Indeed he is usually placed as the second worst after another president of Ulster descent, James Buchanan, the 15th president of the United States (1857-1861). His grandparents emigrated from Tyrone, from the townland of Deroran, just outside Omagh. He is condemned by historians for not dealing with the problems of slavery and for doing nothing to prevent the secession of the Southern states which led to the American civil war.

But that’s another story.