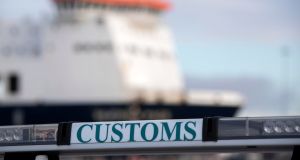 Disruption at ports will settle, though hold-ups could continue to be an ongoing irritant. Photograph: Colin Keegan, Collins Dublin

There will, no doubt, be some queues at ports and disruption in the next few weeks following the UK’s departure from the EU’s trading regime. This will settle – though hold-ups could continue to be an ongoing irritant. But the long-term story of the economics of the UK’s exit will be more subtle – it will be made up of the vast numbers of economic decisions that will change as a result of Brexit.

These will cost Ireland, as trade will become costlier and the price of imports may rise as it becomes more difficult to trade with our nearest neighbour. But we have tended to concentrate on the Brexit impact on goods trade. It will also mean massive changes in the services industry, where doing business from the UK into the EU is going to become a lot messier. This is one area of Brexit which will bring opportunity for Ireland.

Tariff barriers have been avoided, but trading with Britain just got a bit messier, slower and more costly

In the relief of seeing a deal done, we should not forget that this is, by any definition, a hard Brexit. The Brexiteer lobby has won hands down – its influence ensured that the goalposts of the post-referendum debate slowly shifted and this ensured that Britain left the EU single market and customs union.

This means a big and costly change in how the UK trades with the EU – even though there are no tariffs, trade will now be controlled by customs procedures, new VAT rules, food and animal safety rules, complex regulations relating to products made with parts from different countries (which, if not met, can mean tariffs do apply) and so on.

This week Sky News featured a UK business which exports baby eels – known as glass eels – to Continental EU markets. The owner was worried that his customers just might not bother with all the paperwork, the risk of transport delays and so on. Having voted for Brexit his comment was: “Be careful what you wish for.” It is a perfect example of how Brexit tilts the balance; there is nothing that rules that this trade must stop, but extra costs and bureaucracy mean it might.

This will be a factor in trade between Ireland and Britain too. Tariff barriers have been avoided, but trading with Britain just got a bit messier, slower and more costly. This is bound to hit trade, cut profits margins, push up prices a bit and generally lower the volume of trade between the two islands.

Every Irish business trading with the UK and every UK business trading with Ireland will be reassessing – or will have already done so. Much trade will continue, but some won’t. Trade theory suggests, not surprisingly, that the most important markets are the ones closest to you – and so these barriers to trade with our nearest neighbour come with an economic cost.

In sectors like fashion and films, British companies are seeing new problems and bureaucracy in moving people into the EU for work

But there will be opportunities, too. One strikes me in particular. The trade deal between the UK and EU is all about goods. There is very little about the services sector. As former prime minister Theresa May put it in the House of Commons this week, the UK has “a deal in trade which benefits the EU, but not a deal in services which would have benefited the UK” which has a massive services sector, accounting for 80 per cent of its economy,

This will create all kinds of issues. The arrangements by which the UK financial services sector will get access to the EU market have still to be sorted out, for example, and, in any case, will be less favourable than the current “passport” scheme allowing free access.

There are messy rules about UK companies moving people between different markets – vital to many service sector firms – and in many cases the rules will vary from one EU country to the next. Business trips and longer-term assignments thus get more complicated. In sectors like fashion and films, British companies are seeing new problems and bureaucracy in moving people into the EU for work. The UK creative industry – musicians, comedians and theatre – is up in arms about facing a blizzard of visa rules on tours across the EU.

British companies offering financial advice in EU markets will face different rules in different EU markets. British lawyers wanting to advise EU clients on UK law face similar complications. Mutual recognition of qualifications is gone in many areas (though this is maintained between Ireland and the UK, as of course is free movement).

In many cases, there is nothing stopping service companies operating from Britain continuing to sell to EU markets, but it will be messier, more complex, costlier and more uncertain. In time, areas like financial services may find a new equilibrium – and the City of London will remain a force. Big digital firms based in the UK also look set to retain reasonable access to markets. But there have to be opportunities for Ireland.

Some UK banks and law firms established here before Brexit, for example, and will have an incentive to grow their Irish operations. Others will follow, as will firms from other countries like the US aiming to serve EU markets who might otherwise have gone to the UK.

There must also be new opportunities in other sectors for Ireland. It will just be easier to do business from Ireland into EU markets than from the UK. That is what the single market is all about. Ireland is now the obvious English-speaking operating point for selling services into EU markets. And we already have a base in many of the key sectors.

Brexit will lower growth this year as the adjustment to a new regime kicks in, but in the years ahead there will be big opportunities as well.