Midnight Sun: What can I say about Patrick Schwarzenegger that won’t get me shot?

Review: ‘The young man could not be less animated if he were fashioned from Bakelite’ 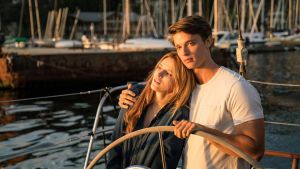 One can say little more horrid about this washed-out sick pic than that it begins as the sort of American film – big in flyover territories – that eventually ends up in the arms of a loving God.

Taking place amid the clean, whitewashed walls of Nicolas-on-the-Sparks, the story concerns an attractive, feisty teenager with a miraculously forgiving version of xeroderma pigmentosum. This all-too-real condition induces tumours when sufferers step into the sun.

Young Katy Price (make your own jokes) remains beautifully unblemished as she cowers within her perfect home. Mom is dead. Dad is an absolute darling who rarely raises a word in anger. When will something Christian happen to cure her condition or to help her face death with a relaxed heart?

As it happens, God does not arrive. But somebody potentially more powerful does drift by on a skateboard. It’s Patrick Schwarzenegger – son of Arnold, great nephew of John F Kennedy – as the lovely, caring, dull Charlie.

We learn early on that the young man missed college after a drunken mishap, but, a film that seeks no awkward corners, Midnight Sun quickly forgets that bad-boy stuff and allows Charlie to become the dreamiest dullard on the block.

What to say about Patrick Schwarzenegger that won’t get us shot? Inheriting a boxy head from one side of his family and a boxy head from the other side of his family, the young man could hardly be less animated if he were fashioned from Bakelite. Indeed, his performance most evocatively suggests one of the cast members of Thunderbirds: every part of the face frozen bar blinking eyes and hinged jaw.

Let’s be fair. Maybe, unlike his dad, he’s yet to find the particular half-octave range that suits him.

Forced to act beside this handsome stick of furniture, Bela Thorne, who sings bland songs and delivers blander dialogue as Katy Price (honestly, I haven’t the energy), comes across as the reincarnation of both Barbara Stanwyck and Judy Garland. She’s grand. She’ll survive.

Other cast members should go back to considering that presidential run in 2032.