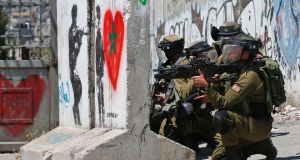 During the late 1970s, when I was what could be called an emerging talent in RTÉ, I received a letter from Kader Asmal, later to become a government minister in the first South African rainbow government, asking me to lend my support to the anti-apartheid movement. Through lack of interest, or callowness, or the pressures of raising a young family, or a combination of all of the above, I ignored his invitation.

Ten years or so later, I had the opportunity, in South Africa, to drive the entire eastern coast to Cape Town, through the Bantustans which then existed. Needless to say, I was appalled at conditions in these open-air prisons, and I deeply regretted my lack of common decency.

In recent years I’ve been reading and hearing about the abuses being heaped upon the Palestinian people by the occupying Israeli government. My sympathies lay with the Palestinians, and I wrote a letter to this newspaper decrying the actions of Bank of Ireland in arbitrarily shutting down the account of the Irish Palestine Solidarity Group. Much good it did!

But I still needed to see it with my own eyes. I heard about a fact-finding trip being organised through a Palestinian tour company, and signed myself and my son Mark up. We were a group of 31, all strangers to Mark and me, and the whole enterprise began with a bit of a stutter.

On arrival at Ben Gurion Airport in Tel Aviv just after midnight, about 16 or so of us were taken from passport control and ordered to a nearby holding area. We were asked who among us had visited Israel before. I admitted, a little sheepishly, that I had been involved in the Eurovision Song Contest in Jerusalem in the late 1970s. Our passports were gathered and about six of our number, including myself, were taken to another holding area where we were seated outside a partitioned office. We were brought in one by one – I was, I think, about fifth in line. I could hear a lot of shouting and banging of desks from the little room as one by one our four fellow tourists were interrogated and then led out and away.

About 90 minutes later I was led into the same small office to be interviewed by two male immigration police. I asked what had happened to the four people who had been in prior to me, and was told they had been deported. I asked why and was shown a phone video of a demonstration of sorts with what appeared to be a couple of Irish people waving a Tricolour and throwing stones at a huge wall. I was asked would I be attending any demonstrations and I said no. I asked what was the deportation process and was told that the four would be on the 5am flight to Istanbul. I asked who would be paying for their flights and was told: “The airline.”

You need a permit to build a house extension, to put in a water tank, to instal a solar panel. And most applications are refused

They took my photograph, handed me back my passport and told me I was good to go. So we were a depleted and somewhat shaken little group who set out at about 4am to satisfy our curiosity about the plight of the Palestinians. However, I vowed not to let our airport experience colour my views over the forthcoming week.

But it was worse than I expected.

Start with the roads. The roads through the Israeli lands range from the superhighway to the efficient. Reach Bethlehem in the occupied territories, however, through the ubiquitous wall, and the roads are potted, higgledy-piggledy, treacherous S-bended and rubbish-strewn. Those Palestinians who have cars must bear white licence plates, to distinguish them from the yellow-plated Israeli cars and to ensure they cannot enter Israeli-controlled areas, including East Jerusalem, without a special permit, seldom granted.

Life revolves around permits. You need a permit to build a house extension, to put in a water tank, to instal a solar panel. And most applications are refused.

If your plot of land is now on the far side of the brand-new (and illegal under international law) settlement fence or wall, you now have to travel great distances to access it. It becomes no longer cost-effective and, as a result, many farmers lose their primary source of livelihood. And after three years the land can be formally confiscated because you didn’t tend it.

If you work or study in Jerusalem you may enter the city only on foot. And the queue starts at 4am. It snakes away for nearly half a mile for the next hours, while the checkpoint soldiers herd you into fenced holding areas before subjecting you to a search and, sometimes, interrogation, often leaving you melting in the sun while they take a coffee break. And then you might be refused entry on a whim.

There are checkpoints everywhere, manned by armed soldiers. I saw Palestinian youths being subjected to strip searches, being shouted at, pushed and ritually humiliated.

And the shrinking Palestinian territories are, like the Bantustans of South Africa, open-air prisons, walled in, with checkpoints between each one

Our guide, a middle-aged, multilingual Palestinian academic, was approached by three Israeli soldiers and told he was not permitted to walk on the street down which we were headed to the bus. They frogmarched him away. He acquiesced easily, and told us he’d take a taxi to a point some miles down the road.

We saw new homes and apartments being constructed in the settlements – bedecked with “sold” signs. Many Americans, in particular, are buying the dwellings as holiday homes. And the shrinking Palestinian territories are, like the Bantustans of South Africa, open-air prisons, walled in, with checkpoints between each one.

I saw some Palestinian “terrorists” – teenage boys – outside the refugee centre where they and their families live in shocking conditions, having been deprived of their homes and land by the Israeli state. The teenagers threw stones at an adjacent army barracks. None of the stones landed within 50m of their target, but the response was pretty stunning. An armoured truck came speeding suddenly out of the gates and hurtled down the hill to the boys, firing round after round of tear gas.

I found myself temporarily blinded, and I was standing in a doorway well to the side. The only resistance open to the Palestinian people in the face of their daily degradation and humiliation is simply to remain. The Israelis patently wish them gone.