Breda O’Brien: When ‘fatal’ foetal abnormalities are not so fatal 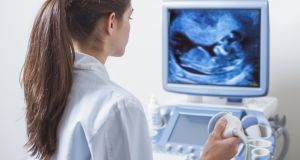 Research discovered that one of the greatest factors affecting survival for babies with trisomy 13 or 18 was whether it was discovered prenatally or postnatally. Photograph: iStock

Dr Marty McCaffrey is clinical professor in neonatal-perinatal medicine at UNC Chapel Hill, a state-owned hospital in North Carolina. He had an epiphany in 2009 when, along with his daughter, Shea, who has Down syndrome, he attended a conference seeking to secure rights to medical care for people with intellectual disability.

He was stunned when he realised he was in a room filled, not just with people with Down syndrome, but with Trisomy 13 (Edward’s syndrome) and 18 (Patau syndrome), routinely described as fatal or lethal foetal abnormalities, but here they were.

These children had very severe disabilities, but they were alive, and very much loved and cared for.

Nothing in his medical training had prepared him for this. He had repeatedly counselled families over the years whose unborn babies had these conditions that survival was impossible and that if born alive, they would die within hours or days.

Yet here were families fighting for medical intervention for their children. As a scientist and a physician, he was driven back to the medical literature to find an explanation.

What he found was disturbing, a medical version of the self-fulfilling prophecy. He dubbed it “lethality begets lethality”. In short, if children with trisomies were expected to die, they did – in far greater numbers.

His findings were confirmed by US research published in 2016, which discovered that one of the greatest factors affecting survival for babies with trisomy 13 or 18, was whether it was discovered prenatally or postnatally.

In 1930s Ireland, life expectancy for people with Down syndrome was nine. Institutionalisation was the norm

Dr McCaffrey explains that many physicians object to treatment, even hydration, for a child with trisomy 13 or 18, either on the grounds that it is pointless or that the child will have too poor a quality of life.

He wonders why, when adults are given the devastating diagnosis of pancreatic cancer, a disease with survival rates of 15-30 per cent at one year and 5-10 per cent at five years, physicians do not describe these patients as “fatal”. Nor do physicians suggest that it is pointless to treat them, or query their quality of life.

In 1930s Ireland, life expectancy for people with Down syndrome was nine. Institutionalisation was the norm. Up until the 1960s children with intellectual disability were routinely hidden away.

Senator Robert Kennedy took a film crew to a US institution for people with intellectual disability in 1965 and described the children as “living in filth and dirt, their clothing in rags, in rooms less comfortable and cheerful than the cages in which we put animals in a zoo”.

What changed? People such as the Kennedys, who had a sister with an intellectual disability exacerbated by an unnecessary lobotomy, used their considerable influence to advocate the end of the use of terms such as mongol, cretin, imbecile and retard. Language matters.

Thousands of other people waged local and national battles to advocate for educational opportunities.

Heart and digestive-system defects began to be treated as they were for the rest of the population. The humanity and equality of people with intellectual disability began to be recognised more. Now life expectancy is closer to 60 than nine.

No one is equating the medical condition of people with Down syndrome with people who have far more serious trisomies. Children with Edward’s or Patau syndrome have very severe disabilities.

But the “quality of life” argument is also influenced by the disgraceful lack of support offered to such families, a lack that with political will could be remedied.

Even still, when a child is discovered to have a life-limiting condition after birth, we do not suggest to families that their grief and devastation will be helped if we hasten death. Why do we do so before birth?

Despite the fact that he is a published author on the subject, they did not consider him worthy of a hearing

Dr McCaffrey sees the spectre of previous attitudes to intellectual disability hanging over allegedly medical decisions. He acknowledges that doctors are well-intentioned, but they fail to see the impact of their own personal prejudice.

Most doctors will never have met anyone who has lived for months or years, or even be aware that the degree of medical intervention in the first days has a huge impact on survival rates.

Dr McCaffrey offered to speak to the Citizens’ Assembly. Despite the fact that he is a published author on the subject, they did not consider him worthy of a hearing.

The Oireachtas Committee on the Eighth Amendment should remedy that situation immediately, unless it is just a box-ticking exercise with no interest in really looking at the issue with fresh eyes.