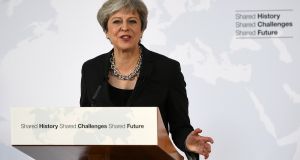 Brexit is written in binary code. It is all zeros and ones - out of the European Union or in. In his long Telegraph essay last weekend, the British foreign secretary and totem of the Leave campaign Boris Johnson reiterated the iron imperatives of last year’s referendum: “The choice was binary. The result was decisive. There is simply no way - or no good way - of being 52 per cent out and 48 per cent in.”

This has an impeccable logic, in the way mad things often do. In her speech in Florence on Friday, Johnson’s supposed boss Theresa May was trying, in her own weak way, to tweak that logic, to find some wriggle room in the relentless bind of the binary.

The concrete content of the speech may be less important than its signal of distress - though whether May is waving or drowning remains an open question. She is edging towards some way to be - however temporarily - at least a little bit in while moving out.

This is what mathematicians call fuzzy logic, the logic of vagueness where there are infinite possible gradations between zero and one.

Her problem is that compared with the clean and clear choice that Johnson offers - in or out - the search for a transitional compromise deal is indeed fuzzy.

As she retreats from the confident, if rather ludicrous, tautology of “Brexit means Brexit”, she must wander into a no-man’s-land of ambiguities and uncertainties. May’s compromise offer is slight and tentative but the abandonment of the lofty rhetorical heights of last January is unmistakable.

Almost a year ago, the president of the European Council, Donald Tusk, prefigured Johnson when he suggested that “the only real alternative to a hard Brexit is no Brexit”. From both sides of the English Channel, the binary view makes sense.

It is easier for the EU if the UK simply departs - a part in/part out arrangement, even for a few years, undermines the clarity of the rules of EU membership.

And, conceptually if not in practice, it is also easier for the Brexiteers. Since, as Johnson claimed, Britain outside the EU will be nothing less than “the greatest country on Earth”, why should it wait around in the anteroom of historic destiny?

In an essay that was much more interesting than its headline-grabbing mendacities and implied leadership ambitions suggested, Johnson was really delivering a classic break-up speech. And although he didn’t actually use the old “It’s not you, it’s me” line, he came pretty close.

Cleverly, instead of attacking the EU, he depicted Britain’s membership of the union as just one of those relationships in which the lovers are bad for each other. They don’t mean to be but they are.

And he suggested that the Brits, unhappy and misplaced, had become impossible to live with: “It is wrong for us to be there - always trying to make things different, always getting in the way, always moaning.”

Johnson’s tale of the Brits as partners in a doomed marriage has a compelling moral: make a clean break. The couple who were never meant for one another will find a way to be perfectly civil, even friendly, in the future, but only if, to coin a phrase, they consciously uncouple first.

No sentimental one-night stands, no teary evenings looking at the wedding photos, no possibility that they might, after all, give it another go sometime.

Theresa May, on the other hand, now finds herself edging towards the suggestion that the couple should share a house for a few years and not finalise the divorce until Britain is ready to occupy the apartment it has not yet begun to build.

The point is not that May is wrong - she isn’t. It’s that the binary logic is all on Johnson’s side. The strangeness of where the Brexit paroxysm has led us is that the hard Brexiteers once characterised by a close ally of David Cameron as “swivel-eyed loons” are logical but not rational.

The sensible compromisers are rational but not logical. The crux of the matter is this: compromise means mirroring the EU as closely as possible so you can still enjoy some of its benefits. Rule Brittania will segue into I Wanna Be Like You.

And if you’re going to be as like the EU as possible, why not stay in the EU? In Johnson’s metaphor, if you’re going to live in the same house, sleep together and with no one else, pay into a joint bank account and do your share of the domestic chores, why get divorced at all?

The answer, of course, is that you’re trying to make the best of a very bad job. And that best is inevitably second best - Johnson was not entirely wrong to characterise the compromise position of staying in the single market and/or the customs union as one in which Britain is “turned into a vassal state - taking direction from the EU, but with no power to influence the EU’s decisions”.

If, as May signalled on Friday, the UK is moving away from the clean break she called for last January, the nation is indeed going to be, for some as yet undefined period, not the glorious British sun but a satellite locked into the EU’s gravitational pull and palely reflecting its light. It is an oddly humiliating overture to what May still insists will be a heroic grand opera.

The underlying problem is with binary thinking itself. Where May and Johnson do not differ is in their insistence that people can belong to one thing or the other, but not to both. They can be British or European; they can be with us or against us. May, in the hubris before her general election nemesis, characterised pro-Europeans as “citizens of nowhere”.

Johnson, in his essay, declared himself “troubled with the thought that people [in Britain] are beginning to have genuinely split allegiances” - with Brexit as the cure that will restore the binary choice between Britishness and Europeanness. Underlying the whole mad project is the idea of belonging and sovereignty as zero sum games - it is either/or, not both/and.

The British problem is that all the rationality is on the side of both/and, but all the emotional clarity is with either/or. If it is to avoid disaster, Britain needs to accept messy ambiguities. But it is still led by a party that allowed itself to be captured by the stirring simplicities of a stark choice between national failure and impending glory.

The question after May’s speech is the same as it was before it: who has the authority to invest a painful climbdown with the emotional potency of a patriotic imperative?