Brexit has enabled the EU to reveal its essential essence 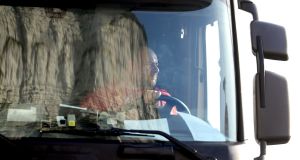 White cliffs: Lorries arrive at the Port of Dover in Kent in recent days, after the introduction of post-Brexit regulations. Photograph: Gareth Fuller/PA Wire

The European Union embarked on a future without one of its large and influential states at 11pm GMT on December 31st when the UK transition period ended. When announcing the 11th hour EU-UK deal on Christmas Eve, Michel Barnier began by saying “The clock is no longer ticking”. The reference to the ticking clock was an acknowledgment of the highly pressurised and time-bound negotiations that characterised the United Kingdom’s departure from the union.

Has the EU emerged stronger from Brexit? I argue that the EU became tougher, more resilient and yes more durable as it confronted the dangers of Brexit. More importantly, Brexit enabled the EU to reveal its essential essence.

The UK exit provided living proof that membership of the EU is the voluntary choice of its member states. This is not a union held together by force and coercion, so characteristic of the past. Secession followed a legally prescribed process that protected both the union and the departing state. That said throughout the process, the EU and its members were intent on defending the collective project and ensuring that the departure of the UK would not lead to further exits.

Despite the enormity of the shock, within a week of the referendum, the EU of 27 (minus the UK) fashioned a robust response to Brexit that remained remarkably coherent and consistent throughout. The response was built on unity, protecting the internal market and the related four freedoms as well as ensuring that a non-member state could not have the benefits of market access and EU policy regimes without obligations. Membership had to matter. Importantly, the EU was determined that Brexit negotiations would not dominate its immediate agenda or long-term future.

Brexit provided a reminder of the formidable collective power of the union when conditions enable that power to be unleashed. There was an extraordinary display of institutional co-operation and collaboration led by Barnier. The so-called Barnier method worked because it was grounded in deep knowledge, meticulous homework, transparency and informing the member states and European Parliament every step of the way. The union designed the negotiations to gain maximum leverage throughout and will continue to deploy EU market power in the next phase of relations with the UK.

During the exit process the EU got on with its own objectives and projects irrespective of Brexit. The new European Commission president, Ursula von der Leyen, set out a series of ambitious and transformative goals for the next phase of integration including the new green deal, digitalisation and Europe’s role in the world. All three areas represent major projects involving crosscutting issues that will affect everything about how Europeans live and work. Her emphasis on geopolitics reflected the interconnection between Europe and wider global dynamics.

As the UK departed, the union had to contend with coronavirus that effectively put the European economy into a coma. Mindful of the failures of the euro zone crisis, the EU reacted with far greater speed to the pandemic than it did to the financial crisis. The first Brexit dividend arrived in July 2020 when the union reached agreement on a European recovery instrument funded by collective borrowing, a major breakthrough in the history of integration. This would not have been possible in an EU of 28.

Beyond these internal cleavages, the union finds itself in a neighbourhood that generates threats, trouble and potential chaos

Notwithstanding the EU’s strong performance during the Brexit process, the union faces multiple tests over the next decade. Governing a continental union involving 27 states characterised by a deep diversity of wealth, politics, culture and history will never be smooth nor linear. We should continue to expect deep tensions, cleavages and messy politics as the union embarks on what is a wide-ranging and dynamic agenda.

Two cleavages in particular present acute challenges to the union. The first is the dangerous deterioration in the operation of the rule of law in a number of member states, notably Hungary and Poland. Neither would be admitted as member states today. That said, the EU was right to enlarge to the east and offer post-communist societies a chance of a better future. The second cleavage is the uneven economic performance of euro member states and the vulnerability of the currency zone to future shocks.

Beyond these internal cleavages, the union finds itself in a neighbourhood that generates threats, trouble and potential chaos. The MENA region, Turkey, Russia and the former Soviet republics all present the union with uncomfortable dilemmas and choices. For much of its history, EU states wished for a world that was more like Europe but now have to confront a world in which Europe is an island of relative stability in an unstable neighbourhood.

Wider geopolitical dynamics are no less pressing as great power competition enters a new phase. On the one hand, the EU has to seize the opportunity offered by the Biden presidency to reset transatlantic relations and work with the United States to foster multilateralism. On the other hand, the EU wants to avoid domination by US preferences without an ability to forge its own path. Hence, the determination of the German EU presidency to conclude the comprehensive agreement on investment with China before the Biden inauguration. The triangular relationship between the US, Europe and China is set to dominate global politics over the next four years.

The EU emerges from a decade of crisis having experienced, endured and managed a number of existential challenges. It has been severely tested and contested but remains the pre-eminent institution in this part of the world for managing deep interdependence. If the union comes close to delivering on its transformative agenda over the next decade, however messy this is likely to be, it will provide living proof that pooling sovereignty is a more effective response to the 21st century than the chimera of sovereignty and taking back control.