Mediahuis is in for a shock at Independent News & Media 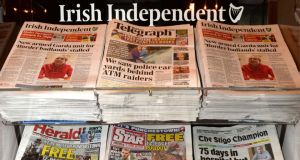 The early-morning news bulletins were unambiguous: Denis O’Brien and Dermot Desmond had approved the takeover by Mediahuis of Independent News & Media, where they held “almost 45 per cent of the shares between them”. O’Brien had almost twice the shareholding of Desmond.

Approval, in any walk of life, it is safe to say, is something sought from those in control. In takeover matters, it is particularly so.

It’s always good to see a jaded canard laid to rest. Who knew? O’Brien was in control all this time.

For seven long years, since the INM agm of 2012, where O’Brien’s long-time business associate Leslie Buckley became chairman of the board, INM took an official line: O’Brien does not control INM.

The mantra – Denis O’Brien does not control INM – became a tortuous mind game that few could withstand.

Seven years is how long it takes for a major molecular transformation to be complete. And for seven years that mantra permeated every level of activity in the group, publisher of the Irish Independent and Sunday Independent, sweeping away the ethos of its previous major shareholder, Tony O’Reilly.

Democracy needs a pluralist and free press. A newspaper group, like any organism, is not perfect, but, for all its faults, the previous iteration had respect for journalists and journalism.

In the profound molecular transformation of the last seven years, many good people, including excellent journalists and managers, lost heart. And they can’t be blamed: unedifying – even humiliating – practices, well documented by former journalists, including myself, became the norm.

Mystifyingly, with a few honourable exceptions, like Catherine Murphy and Lucinda Creighton, politicians had little heart for challenging the potential lack of pluralism in Irish media.

Concerns about media concentration were met with paralysis, to the point where the clear and immediate threat to democracy seemed to be less the major shareholder - who was found by the Moriarty tribunal to have made payments to a government minister, Michael Lowry, who in 1995 assisted him in winning a mobile-phone licence that was the foundation of his fortune - than official Ireland, which to its shame accepted the situation.

The Mediahuis takeover will be a culture shock. For Mediahuis as well as INM. The Belgian-Dutch media company is taking on a traumatised organisation that faces serial litigation by current and former employees for breaches of their data, as well as other matters, and is under investigation by the Office of the Director of Corporate Enforcement.

These are matters that can be sorted. Paying off litigants will undoubtedly be factored into the takeover costs. The ODCE investigation will proceed, and in any case it wasn’t under Mediahuis’s watch.

Matters of morale and leadership are harder to tackle. The relentless hollowing out of talent leaves INM weakened in several areas of serious journalism. But given proper focus this may be speedily reversed. The strategic errors around the digital project may prove trickier.

A defining strategy of the O’Brien regime lay in the relationship between traditional, print media and the new, digital media. A decision was made to prioritise digital, and the strategy was called digital first. This could have worked out fine were the right decisions made. But digital first was profoundly flawed.

It is undoubtedly the intention of Mediahuis to introduce a paywall. But journalistic quality is the sine qua non of a paywall, and that will prove extremely difficult to achieve in an organisation that has not prioritised talent for some years.

By bringing its online content downmarket INM has handed Mediahuis a gargantuan task.

But Mediahuis is a young, energetic company. It does not even need a reforming zeal to change the ethos of INM. The world from which it comes is a world that would seem like an Arcadian fantasy to workers at INM.

The concept of social partnership was invented in the Netherlands, and the Dutch have a long history of social dialogue. That means employers talking to unions (remember them?).

Recent studies show the Netherlands to be third in Europe (after Sweden and Denmark) for workers’ rights and work-life balance.

Mediahuis says its ethos is underpinned by an “unreserved belief in independent and quality journalism”. It says many more things that must be music to the ears of those whose morale has been battered.

But I am prepared to bet that those words “commitment to independent and quality journalism” will be enough to lift the hearts of the many excellent journalists and managers left in INM.

They would be for me.

Anne Harris is a former editor of the Sunday Independent

1 Coronavirus: 50 new cases as Glynn says phase four delay disappointing for many
2 Gardaí surrender 13 people to Polish police
3 Fresh investigation into the murder of Michaela McAreavey in Mauritius
4 ‘I wandered around Dublin wondering: Is this what they call a capital city?’
5 Funeral of John Hume hears peacemaker ‘gave dignity and life to so many people’
Real news has value SUBSCRIBE