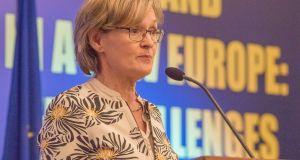 Mairead McGuinness MEP addresses the MacGill Summer School: research shows a woman has only one-third of the opportunity of a man to speak at forums. Photograph: North West Newspix

In 2016 and 2017, 75 per cent of those listed on the “papers delivered” section of the MacGill Summer School website were men. There were a number of all-male panels listed at the school over several years but no all-female panels. In the 2018 school, however, there is now an impressive 40 per cent female speakers listed after a rush of positive action.

Several questions now arise, however: if MacGill can reverse a negative trend so quickly what else can be done to address the much wider problem of women’s unequal participation on panels in the Irish public sphere? Why do some events and organisations achieve gender parity when others fail?

Historically, male panels were evident in, for instance, all-male juries and parliaments which denied women the right to vote. Statistically today “manels” still persist in many public forums and are extremely prevalent in the Irish media, academia, business and politics. For instance, the most recent edition of Irish Historical Studies, the journal of Irish historians, was widely criticised because all 10 articles were written by men. Likewise some prominent radio and television shows are known to habitually include very few women on panels.

Manels in reality serve to demean, exclude, undermine, offend and disadvantage a whole generation of women in Ireland. The practice of adding a woman to the ticket only after a gender problem is noticed likewise reeks of tokenism and puts off many women from participating in events.

Women in Ireland speak far less than men in public. A recent study by the Open Society Foundation looking at five years of high-level conferences in Europe reveals that a woman has only one opportunity to speak for every three times a man speaks. The dominance of male presenters and speakers has major implications for women, the study argues, because of the impact on key policies and decision-making which such events can have.

Conference and summer school organisers and media outlets are the gatekeepers who make decisions about who will have the opportunity to share their views with policymakers, journalists and business leaders.

Society in general needs more robust, gender-sensitive, social and educational policies to create the conditions for greater participation of women in public life. Addressing the “four Cs” coined by Senator Ivana Bacik in a study of women in politics – cash, confidence, childcare and culture – remains necessary. Some men bowed to pressure to stand down and permit women to take their place at the MacGill Summer School this week.

“Leaning in” may help enhance the visibility of individual women – and we need more female role models and leaders – but this will not change the overall structures and culture that serve to exclude women. Moreover, “lean in” is dependent on an individual woman having the privilege, confidence and “clout” to do this in the first place.

Many women do not possess any clout or influence, and will require adequate notice and advance resources from organisers to travel and participate in events and in the media. Panel organisers, and television and radio producers relying on experts beyond elite institutions and the usual suspects is also critical if participation in the public sphere is to be widened in Ireland.

The Danielle Carroll Summer School last week responded to the MacGill controversy by focusing on women directly impacted by homelessness, poverty, austerity and profound injustices in our society. The historian Catherine Corless likewise has proven that critical expertise often lies in local communities outside elite institutions and among women.

Often women themselves are blamed for manels – accused of turning down invites all the time, being never available especially at short notice and considered not as “good” as the men when on.

Yet many strategies exist for increasing the number of women on media panels – for instance including gender-bias training for producers and researchers. Likewise gender monitoring, targets or quotas overseen by bodies like the Broadcasting Authority of Ireland would focus minds. “Fixing the women” strategies such as media training and mentoring are important but will not fundamentally change the unconscious bias that determines how panels are decided at source.

MacGill learned the hard way that manels will cause a reaction – but they can be addressed. Importantly, the necessary presence feminism has in Irish public life was demonstrated. Activism, protest, naming, calling-out and social media organising all generate a real challenge to male-dominated arenas. Examples of this in the arts, the media and academia include Waking the Feminists, Fair Plé, Academic Manel Watch, the Gate Theatre investigation, the Micheline Sheehy Skeffington three conditions campaign and Women on Air.

The State also has an important role to play. Should manels funded by public money (that women workers contribute to through taxes) be prohibited? Should State gender quotas be introduced and economic sanctions implemented for events, media bodies etc if equal gender representation on panels is not achieved? Should Irish universities not receive research funding from Science Foundation Ireland and the Irish Research Council, for instance, if they do not increase the number of women in senior positions

And what about men? Imagine one learns about a manel only a few days before a conference. What do you do? Drop out? Defend it? Deny it? Avoid responsibility? Or call it out and demonstrate solidarity and resistance with women? As #metoo and other campaigns have shown, speaking out in any situation will be contentious. But these kinds of disruptions are a necessary step in tackling manels. The women are clearly there if invited and included.

Prof Linda Connolly is the director of Maynooth University Social Sciences Institute. She is speaking on Friday on the 2018 MacGill Summer School panel on the subject of “Women in Irish Public Life: Why are Organisations such as MacGill Summer School still Trapped in a World of Gender Stereotypes?”