Diarmaid Ferriter: The PM’s Brexit strategy is to limp on. She should face down her critics 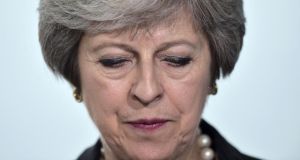 Theresa May: putting personal survival above the needs of the country is doing untold damage to British politics. Photograph: Charles McQuillan/AFP/Getty

In May 2017 Theresa May, the British prime minister, promised European Union officials she would be “a bloody difficult woman” in Brexit negotiations, after being criticised for underestimating the talks’ complexity and having “illusions” about a deal. Her comments were a reference to an off-the-cuff remark about her by the former Conservative chancellor Ken Clarke that went viral. May also used the description in March this year in another context, by paying tribute to all the “bloody difficult women” taking part in the March4Women London rally.

But, if she stays on her current path, history is likely to record that May was not nearly difficult enough. Given that the question of Britain’s relationship with Europe is the defining issue of its contemporary politics, it is obvious that any Brexit position or deal will be divisive. But May’s strategy of attempting to endure multiple wounds and limp on, rather than defiantly face down her critics and their delusions, is not the answer.

It is ironic May was keen to cut short the Commons term this week to buy more time. This is the institution she heralded as a reason why the UK needed to leave the EU

It is ironic that May was keen to cut short the House of Commons term earlier this week to buy more time. This is the same institution she heralded as one of the reasons why the United Kingdom needed to leave the European Union in her 12-point speech on Brexit last year: “Our political traditions are different. Unlike other European countries, we have no written constitution, but the principle of parliamentary sovereignty is the basis of our unwritten constitutional settlement . . . The public expect to be able to hold their governments to account very directly, and as a result supranational institutions as strong as those created by the European Union sit very uneasily in relation to our political history and way of life.”

If May is serious about that political history and the extent to which Britain is at a crucial juncture, requiring what political scientists refer to as a “repurposing of the state”, she needs to take on her enemies robustly. Given what is at stake, putting personal survival above the needs of the country is doing untold damage to British politics. If Brexit has redefined British politics, in the sense that the broad consensus that has marked it for the past few decades has crumbled, then the prime minister needs to approach her challenge accordingly and decisively.

Talk of another referendum is naive and would only exacerbate and prolong the divisions. May has to make more effort to manage Brexit, and by taking control of that management she could also, albeit probably by paying a big personal political price, pursue meaningful statecraft, which is her bloody difficult job.

But she does not seem to be prepared to do it. Most Conservative MPs do not want a hard Brexit; neither do most in the Labour Party. But that reality has been placed behind the priority of seeking to indulge the political incoherence in both parties and within the Conservative Party. This is pandering to an alliance that contains too many populists and delusional snobs who conveniently blame the EU for the decline of Britain and for preventing it from realising a “glorious vision” of a “global future”, a description that has been unwisely used by May and was conveniently reiterated in the House of Commons this week by the boorish Boris Johnson.

In what direction does such a glorious vision point? Towards the United States of the infantile and deranged Donald Trump for a sublime free-trade future freed from the shackles of free-trading Europe?

A determined, difficult but principled leader should and could be able to manage Brexit, and not just because of the importance of establishing a new relationship with Europe and confronting the Irish question. May needs to ignore the insistences of the likes of Johnson and Liam Fox that the Border is not a crucial issue; it is, and there is more than enough tortured history behind it to prove that and to underline that Northern Ireland is and always has been a special case within the UK and needs to be considered accordingly. But the key point is that it is clear that British politics is not currently equipped to deal with Brexit and as a result needs to be fixed. The fragile coalitions within both main British political parties are hardly sustainable and can be settled only with effective leadership, coherence and courage.

Much as the Brexit vote may have caused dismay in the EU, and especially in Ireland, it was understandable given the continuity of the historic reluctance in Britain to fully engage in ideas of European union. That will continue, but it does not mean a new solution cannot be worked out. May needs to find her version of what Churchill characterised as a Britain that was interested in and associated with Europe but not absorbed by it, a version that is not a pandering to the likes of Jacob Rees-Mogg but one she has framed herself.