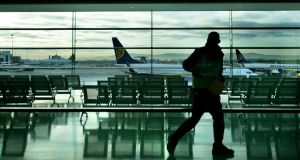 The story of the Irish airman who foresaw his death is well known, thanks to WB Yeats. The happier one of the Irish airman who oversaw the birth of civil aviation in this country is more obscure, although it started the same year as Maj Robert Gregory’s demise and in circumstances that were also fraught, the Great War having given way by then to a War of Independence.

Born in Leitrim in 1894, Michael McKeon had become an officer with the Royal Air Force in England when he was ordered back to Ireland in August 1918 to establish flying operations at the new Collinstown Aerodrome in north Dublin.

It was still being built then – there were open drainage trenches in parts of the landing area. Despite which, within days, he and his colleagues had made the inaugural flights on what would become Dublin Airport.

A more dramatic event, although entirely at ground level, followed in the early hours of March 20th, 1919, when the IRA raided the RAF guardhouse at Collinstown for weapons. There were only three sentries on duty, with their rifles unloaded. The raiders first overpowered, tied up, and gagged them, before doing the same to eight sleeping colleagues nearby.

Then they helped themselves to 72 rifles and a large quantity of ammunition. So slick was the operation that most of the RAF men on site slept through it. The alarm wasn’t raised for an hour afterwards, by which time the raiders were well away, having taken the added precaution of slashing the tyres on the airmen’s ground transport.

The following month, undaunted, RAF headquarters in Merrion Square pressed ahead with plans for the era of civil aviation in Ireland, seeking the immediate appointment at Dublin’s other aerodrome, Baldonnell, of an overseer with all the necessary experience as well as “great tact”. McKeon was the man chosen, and so it was that he made the arrangements for the pioneering flight of a new era, in June 1919.

The VIP passenger was Gordon Selfridge of the London department store, who had just bought the Dublin equivalent, Brown Thomas, and was nipping over to have a look. McKeon signed the invoice for services rendered to him at Baldonnell, including a landing fee (five shillings), “hangarage” for two days (10 bob each), and 30 gallons of petrol, at a total of £6.15.6.

A confident Selfridge told The Irish Times that his “three and a half hour” flight had opened the way for an age when people would be able to “live in Dublin and do business in London”. He also foresaw imminent transatlantic flights, although his timetable for those – “three, or four, or five years, or perhaps less” – was overambitious.

It was be a full 20 years before a Capt JC Kelly-Rogers, also ex-RAF, piloted the first of the short-lived Flying Boats from the US into Foynes. The same Capt Kelly-Rogers would fly Winston Churchill on all his wartime crossings of the Atlantic before joining the management of a new Irish airline called Aer Lingus and later again setting up an Irish Aviation Museum.

I mention him for more than those reasons, because after McKeon’s death in 1972, he also wrote an appreciation of his friend for the Guardian (the Leitrim Guardian, that is, not the lesser known one in Britain), to which I’m indebted. That and other material – including the Guardian joke – came to me via a latter-day Michael McKeon, the original’s grandnephew, who was prompted by this week’s appointment of Ireland’s latest air travel regulator. Diarmuid Ó Conghaile takes up the post at another difficult juncture for aviation, this time due to a pandemic, although in some ways history is repeating itself.

Yeats’s friend, Maj Gregory, is thought to have been a victim not of enemy fire in 1918, but of the Spanish Flu then newly breaking out in Europe.

It may have been an inoculation, the flu shot of the era, that caused him to pass out at high altitude.

That was also a time for masks in Ireland, even if the ones worn by the Collinstown raiders had nothing to do with disease control.

Meanwhile, among the consequences of their heist were new security rules for RAF camps, one of which might be described as social distancing.

Henceforth, it was forbidden for a sentry to be on duty alone unless his sleeping colleagues were so close that he could “touch one of them with his foot without moving from his post”. Alternatively, he had to be “in direct mechanical communication with them” by means of “a wire or cord actually held in his hand”.

1 Former solicitors ran an ‘identity factory’ in committing fraud – court told
2 Ciara Kelly: I was pregnant, unmarried, a junior doctor and I got old-school comments
3 Kanturk farm shootings: A timeline
4 Cork shootings: Postmortems on two of three family members complete
5 Son (23) who died in suspected Cork murder-suicide was due to graduate
Real news has value SUBSCRIBE