Saving Face – Frank McNally on having a mild case of prosopagnosia 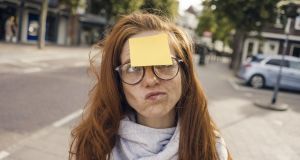 Do you never forget a face? Photograph: Getty Images

Running in the Phoenix Park the other day, I met a cyclist – lycra-clad, as cliché insists – whose smile of recognition forced me first to slow down and then stop. “It’s yourself,” he said, clearly delighted to see me. “How many years has it been?”

By now I was smiling back in apparent mutual recognition although, as happens all too often, I had no idea who he was. I was playing for time, trying to remember to which of the overlapping communities I call my life he belonged.

Then I realised he was talking about Mountjoy Prison, in the 1990s, and some sort of race he had run while there. Furthermore, he was recalling a photograph of the occasion and wondering if he still could get a copy: “I’m after turning my life around. It’d be nice to have.”

A penny dropped or seemed to. I must have covered this event, or at least mentioned it, in the paper, even if I had no memory of that either. But no.

The picture had not been in any newspaper, he clarified. “It was just a mugshot, in the prison.”

That’s when I replaced my smile of recognition to one of embarrassed regret. “You know, even though you do look familiar,” I said, “I’m afraid you’re mixing me up with somebody”.

He was already mirroring the smile and nodding. “Yeah, I was beginning to think the same thing. I was saying to myself: ‘Mister Lonergan’s looking very fit for his age’.”

Turning this mixed compliment over in my mind, I wondered how long it had been since John Lonergan retired as Mountjoy governor. Ten years, I guessed, and that was after a full career.

But the man was remembering him from the time they knew each other, I suppose. I wished him luck with his new life, as Mister Lonergan would have done, and jogged on.

I wouldn’t claim to suffer from prosopagnosia – face blindness – exactly. But I must have a mild form of the condition. This was first revealed to me many years ago on the night of my Leaving Cert party.

The girl I had asked was not well known to me. I had mainly admired her from the opposite side of the local main street, which is a wide one. But the asking bit needed to be done up close, in the middle of the street, on a market day, while my friends engaged her friends in diversionary manoeuvres nearby, a situation so nerve-wracking it should have etched every detail on my mind. Between that and her picture appearing in the paper around the same time, I had in the intervening days become emotionally involved with the arrangement of her facial features.

Then the night arrived. Another friend, Gary, was bringing someone from the same area and had his father’s car, so we went together. And just as we were arriving at the house, we passed a young woman, walking, who turned and smiled, expecting us. She was only slightly familiar to me, I realised. And there was good reason for that. I’d never met her before.

But as I grinned gormlessly, Gary looked from her to me and said: “Is this…?  And I was about to say “Yes”, when she rescued me. “No, I’m her sister.”

The terrible thing is, when you saw the two together, they were not alike. (By the way, the party happened in a local hotel we called “Lonergan’s”, but that’s just a spooky coincidence.)

My poor grasp of faces is one of many reasons I never went into politics, despite a family background in the trade. A similarly-afflicted (in both senses) friend tells an instructive story about her and her mother running into a well-known Fianna Fail politician – we’ll call him “Donie” – in a hotel somewhere, maybe 30 years after he had met the mother, once and briefly.

He was having his dinner this time (the middle of the day). But in seeing them he paused, did a quick mental scan, remembered that the mother was “Betty” and the daughter “Sarah”. Then, as the pièce de résistance, he asked the former: “How is Willie getting on?”

It was, as Sarah says, an awe-inspiring display of what sets Irish career politicians apart.

Some of us struggle with faces. Some with names. The man in the Phoenix Park had a photographic memory, but no time-lapse mechanism.

If you can put all these skills together, logging faces, names, and family relationships of complete strangers, there’s a good chance you’ll end up taoiseach.

1 Cork shootings: Gardaí investigate whether attack was planned by two of the deceased
2 Former solicitors ran an ‘identity factory’ in committing fraud – court told
3 Ciara Kelly: I was pregnant, unmarried, a junior doctor and I got old-school comments
4 Michael McDowell: We must check if this Covid-19 lockdown is really necessary
5 Cork shootings: Postmortems on two of three family members complete
Real news has value SUBSCRIBE