Vision and courage needed in Stormont 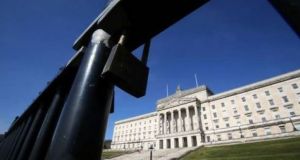 Sir, – Like many others, I am disillusioned by the failures of Northern Ireland’s politicians, and in particular the lack of vision and courage by the leadership of the DUP and Sinn Féin.

A mandatory coalition has simply not worked as the leaders of the two main parties have continued to look over their shoulders and seem only concerned to please their own electorate. Obsessed with secondary issues such as flags and the Irish language, they have overseen chronic failures in the health service, confusion and waste in the education sector, fiascos such as the Renewable Heating Initiative and a superficial and ineffectual response to the difficulties resulting from the Brexit referendum.

It is time to rid ourselves of the straitjacket that is mandatory coalition and its trappings such as the petition of concern.

Surely voluntary coalition with qualified voting safeguards would be a better option and the voices of moderation and reason might be more easily heard in a Northern Ireland that desperately needs to move on! – Yours, etc,