Brexit and Ireland – a frictionless trade in goods and services? 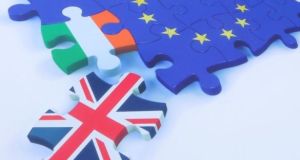 Sir, – As trade union organisations with members in Britain, Northern Ireland and the Republic, we want a post-Brexit deal that protects their jobs through frictionless trade in goods and services.

Our unions will have members both in and out of the European Union, often working for the same employer. They must continue to have equal guarantees to their basic rights at work. And not just on Brexit day, but in the aftermath, so that rights in Britain and Northern Ireland don’t fall behind the Republic and the rest of the EU after Brexit.

We are seriously concerned about the impact of this process on our members’ jobs, rights and livelihoods.

Theresa May’s decision to rule out single market and customs union membership before the negotiations even began was an historic mistake. All options that facilitate frictionless trade in goods and services should be on the table when the UK and EU start negotiating their long-term relationship.

Trade unions played a key role in the Belfast Agreement. We have decades of experience of negotiations behind us, and we call on the UK prime minister to put party manoeuvring behind her.

We need politicians from all sides, and each devolved administration, as well as business and unions, involved in negotiating our future.

That’s the only way to prevent the return to a hard Border, and ensure that workers don’t pay the price of Brexit. – Yours, etc,

A chara, – Stephen Oliver Murray takes an odd view of the current Brexit negotiations (December 1st). He believes that Ireland should take a strongly critical line against the EU, as “we continue to need Britain as a political ally”. This is in spite of the fact that Britain has chosen to fully surrender its vote, voice, and influence in Europe – not exactly a winning horse for Ireland to back.

Mr Murray’s objection to the sequencing of the talks is even more puzzling, given that the main obstacle to further progress is the EU’s insistence that the thorny issue of the Border is first settled to Ireland’s satisfaction. Mr Murray fears that Brexiteers will impose a hard Border to punish us if talks do not proceed. Quite why he views these same Brexiteers as a reliable ally for Ireland is unclear.

To justify his stance, Mr Murray references unnamed “arch-federalists” and “assaults against our tax regime”.

Arch-federalism aside, European tax reform is far from inevitable. Ireland has many allies on this issue, and our veto means that no changes can occur without our consent. We must seek to lead Europe to solutions which work for us, rather than blocking reasonable reforms.

It is clear that Ireland’s interests lie in maintaining a strong united front with Europe during the Brexit negotiations, instead of isolating ourselves to appease Brexiteers. As is our right, Ireland must also engage firmly and positively in the welcome discussions taking place regarding Europe’s future. Amidst all the uncertainty, one thing is clear – Britain will have no voice in that discussion. – Is mise,

Sir, – I think it is now time for Sinn Féin to do the patriotic thing and take up its seats in the House of Parliament and influence the Brexit negotiations like the DUP. – Yours, etc,

Sir, – Over the past few days there has been a marked increase in the volume of the Brexiteers’ assertion that the Irish Government’s hidden agenda in the Border discussions is to achieve a united Ireland by stealth. What is also apparent is that those defending the Irish position have been, in general, too slow to push back on this nonsense and pin the responsibility for the current situation where it belongs.

The jibes about supposed Irish unity ambitions being mouthed by those who devised and promoted the false and dishonest story that got us the awful reality of Brexit should be staunchly rebuffed for what they are – insulting and unwelcome from those who have placed our country’s future economic and social wellbeing in jeopardy.

The Irish position on the Border can be easily understood by anyone who has lived here over the last 40 years. That person can clearly see the dramatic difference between the first and last 20 years of that period and should not be slow to protect what has been gained. The existential threat posed by the return of an Irish Border cannot be overstated and the hope is that those in the public and media space with a stake in the outcome will take every opportunity to drive home forcefully the difference between cant and ignorance on the one hand and peace and harmony on the other. – Yours, etc,

Sir, – Ian Paisley jnr claims that “a lot of people are really exasperated with the amateurishness of the Irish Government”.

At the risk of sounding flippant, at least we have a Government in this part of the island, amateur or not. – Yours, etc,

Sir, – Can we exist and not exist at the same time? Perhaps not as strange a concept as it might seem, when we consider that a couple of years ago, scientists in Stanford University successfully created a quantum superposition, where the same atoms can simultaneously exist in two places nearly two feet apart, but only when the particles are unobserved.

If quantum superposition can be replicated on a grand scale, it might be an ideal solution to our Brexit problem, where goods to be exported can, unobserved, exist at the same time on both sides of our Border, thereby obviating the need for customs checking. – Yours, etc,

Sir, - It is becoming increasingly apparent that an acrimonious divorce is taking place between two big and powerful voices on the world stage, Britain and the European Union. Occasions like this are seldom harmonious and are often fraught with many mixed and toxic emotions, together with a belligerence that can only lead to innocent parties being hurt. In particular collateral damage from divorces can affect the smaller, more vulnerable voices. These voices are routinely overlooked, ignored and bullied into submission by the bigger voices. It, therefore, takes courage for these smaller voices to be heard. Ireland is and will always be a little voice on the world stage, but we have a big heart. In one of its earliest forms, the word courage meant “To speak one’s mind by telling all one’s heart”. The Government will now need to step up to the plate and have the courage to articulate more clearly Ireland’s voice of concern on the world stage about Brexit and the implications it will have on our country. Perhaps then the two big warring parties will take note and no longer ignore our legitimate concerns and fears. We have important things to say, so let our voice be heard. – Yours, etc,

Sir, – The notion that the DUP holds the whip hand with its 10 votes propping up the Tory government is illusory. It might be true if the alternative UK government were not such a leap across the political spectrum, but the idea that Arlene, Sammy, Ian jnr, Nigel, Sir Jeffrey, and the rest, would pull down the most right-wing Tory government in living memory – and lose completely the little influence it has – to facilitate the emergence of the most left-wing UK government in history under Jeremy Corbyn, is risible. – Yours, etc,

Sir, – Your editorial (December 1st) on the DUP and Brexit ends by remarking that “the penny does not appear to have dropped that the party’s commitment to leaving the customs union and the single market would inevitably result in a hard Border across the island”.

On the contrary, it strikes me that the leaders of the ultra-nationalist DUP have always been aware of this probability and I very much doubt it has them tossing in their beds at night. – Yours, etc,