Tom Mathews on the Dart 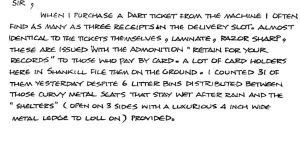 Sir, – When I purchase a Dart ticket from the machine, I often find as many as three receipts in the delivery slot. Almost identical to the tickets themselves, laminate, razor sharp, these are issued with the admonition “retain for your records” to those who pay by card. A lot of cardholders here in Shankill file them on the ground. I counted 31 of them yesterday, despite six litter bins distributed between those curvy metal seats that stay wet after rain and the “shelters” (open on three sides with a luxurious four-inch wide metal ledge to loll on) provided.

Musing on these 21st-century conveniences (back in 1959 there was only a primitive waiting room with chairs, newspapers and an open fire at my local station), I boarded my train and was enjoying the tape naming the wrong destinations and telling me that “This train has CC” (the “TV” having presumably worn away) when the cadaverous young man with his feet on the seat began shouting “Can you hear me, Mother?” into his smartphone and letting her (and us) know that he was on the Dart. Having delivered this message 17 times, he began counting down from 25, increasing the volume at each numeral, ending as we reached Glenageary with a triumphant cry “One”. When he started it again I moved carriage.

I was then joined by a little man whose opening gambit made me fear as much for my own sanity as for his. “Was it cats invented bread and butter?” He went on to ask if I was a student. He disliked students. And did I know why he disliked students? Because they told him that he had mad staring eyes. Did I think he had mad staring eyes? “No”, I lied. And did I like porridge? For his part, he loved it. Then he started shouting: “I’d mainline porridge.” I again moved carriage.

In the third carriage, the plump red-haired girl eating jam doughnuts from a paper bag and beating clouds of powered sugar from a pair of slashed jeans several sizes too small for her was laughing heartily. What so diverted her was a seemingly endless loop of one of Mrs Brown’s son’s aperçus. After about the 30th repetition, it seemed to pall on some of the other passengers, but what cared I, for mine was the next stop.

And it was there that I found I had mistaken the receipt for my ticket. I have retained it for my records. – Yours, etc,