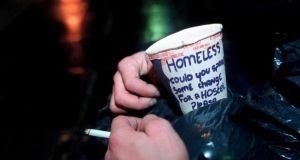 Sir, – After 48 years of working with people who are homeless, I am appalled by the lack of humanity at the pronouncement by Leo Varadkar that it is “good that our homeless figures are not higher relative to our peers”, while at the same time he ignores the constantly rising statistics, particularly the number of children, now listed as homeless. Also in a “republic of opportunity”, it is a national disgrace that we have rough sleepers dying on the streets of our capital city and throughout the country.

What is most disturbing about the Taoiseach’s statement is an apparent disregard for the basic rights of children. The clock is ticking on the social, physical and psychological impact of neglecting to meet the housing needs of families as a direct consequence of their not having access to a “normal” home life relative to their peers.

I appeal to an Taoiseach to “walk in the shoes” of those less privileged, and to first of all acknowledge that the current housing strategy is simply not working and do something realistic to relieve the plight of those suffering the consequences. – Yours, etc,

Sir, – Why do we always have to compare ourselves with others? The Taoiseach said at the weekend that Irish homelessness is not high compared to international standards. So?

What matters is how we as a nation feel about the fact that there are more than 3,000 children classed as homeless.

Sir, – In the last 12 months homelessness has increased by 37 per cent and in the last three years child homelessness has risen by a staggering 287 per cent. In our large urban areas, many people renting in the private sector are paying up to 50 per cent of their income on rent, and in some cases are struggling to put food on the table for their children. In the recent Prime Time exposé of the private rental sector, we saw what this 50 per cent spent on income got many people – squalor, overcrowding and risk to their personal safety.

This Government approved a 4 per cent pay rise for private landlords with no caveats, while the rest of the population continues to deal with rip-off insurance costs, the highest mortgage interest rates in the EU and runaway property prices. Much of this rising rental income will come from taxpayers’ money through rental supplements.

However, the Taoiseach’s ideology means public provision of social housing and tighter regulations of private landlords, including rent caps, are an anathema.

Leo Varadkar would be well served to start listening to the burgeoning underclass developing in this country instead of the comforting whisperings of the well-heeled and those with a vested interest in the status quo. He might learn something about the reality of our so-called “recovery’”. – Yours, etc,

We need a Taoiseach who takes responsibility. Someone who is serious about actually solving the problems people are facing in this country – not someone who marshals a team of spin-doctors and speechwriters to insinuate that there is an acceptable level of homelessness. – Yours, etc,

Sir, – “Homelessness is a dreadful thing, but it is normal, says Housing Agency” (News, November 13th).

Is “normal” the new euphemism for a lack of political will? – Yours, etc,

1 Seán O’Brien: Anger over my parents’ break-up never left me
2 Further anti-lockdown protest held in Dublin city centre
3 Sacha Baron Cohen: ‘I had to ring the alarm bell and say democracy is in peril’
4 ‘I’m sleeping with my ex-boyfriend and want him back – but don’t want to scare him off’
5 We need to reverse our thinking on lockdown
Real news has value SUBSCRIBE