Lack of surgeons and paediatric care 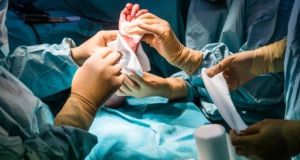 There are differences in practice between the two jurisdictions, making comparison more difficult. In Northern Ireland, scoliosis surgery is delivered by spinal surgeons rather than paediatric orthopaedic surgeons, and we have a more centralised service with a smaller private sector. However, our birth rates are very similar and we are faced with the same pathology.

In Northern Ireland, we too have difficulty in meeting demand. The current waiting time to be seen for a routine outpatient appointment is over a year. Some of our patients for surgery, especially scoliosis, have encountered long delays, and some have also had to travel to Britain for surgery. We have major problems with access to theatres and hospital beds, and this has recently got worse. Like Dublin, we also have problems working from cramped and outdated facilities, although it is hoped that we too will get a new children’s hospital, the timeframe for this seems to be continually slipping. Many of the children who benefit from paediatric orthopaedic surgery have disabilities. There have been big improvements in our management of these conditions in recent decades. The actual numbers of children affected is finite.

However, there does need to be an increase in capacity, both North and South, to ensure these children do not suffer from delays that will give them any further disadvantage. – Yours, etc,