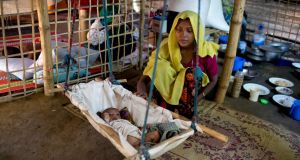 A Rohingya Muslim woman rocks a cradle with her one-month-old son Mahafuzur Rahman at Thaingkhali refugee camp in Ukhiya, Bangladesh on Tuesday. Photograph: AM Ahad/AP

Sir, – Bob Geldof should be fully supported in his effort to “do something” to bring the ongoing horrific suffering of the Rohingya people back into the media spotlight.

Perhaps some of his fellow recipients of the freedom of Dublin will consider following his example in order to keep this issue highlighted in the media.

Surely there are among them some who can see that the survival and wellbeing of 650,000 (and counting) starving, sick, wounded, cold and wet Rohingya refugees (nearly half of them children) camped out under thin tarps matters immeasurably more than a scroll that records their freedom of our capital city. People over paper. – Yours, etc,

Sir, – Whatever people might think about the occasional intemperate outburst by Bob Geldof, you have to admit his decision to return his freedom of the city award by Dublin has attracted a lot of publicity and helped focus attention on Myanmar’s treatment of the Rohingya Muslims.

While there have been calls for Geldof to also return his knight commander of the Order of the British Empire award in protest at England’s imperialist past, I think it would be more relevant for him to consider returning his 2011 honorary doctorate from Ben-Gurion University of the Negev in Israel in protest at that country’s refusal to end arms trading with Myanmar despite the genocide against the Rohingya. – Yours, etc,

Sir, – If Dublin City Council learned anything this week, it is to stop conferring the freedom of the city to publicity starved “rock stars”, who have a tendency to bite when feeling forgotten. – Yours, etc,

Sir, – Bob Geldof has rightly called for the freedom of Dublin to be taken back from Aung San Suu Kyi.

Rather than prevaricating, Dublin City Council should show the Nobel Peace Prize committee exactly how such things are done for those who disgrace honours bestowed on them in the name of freedom and peace. – Yours, etc,

1 Seán O’Brien: Anger over my parents’ break-up never left me
2 Further anti-lockdown protest held in Dublin city centre
3 Sacha Baron Cohen: ‘I had to ring the alarm bell and say democracy is in peril’
4 Couple found guilty of murdering Irish dancer with ‘devil’s breath’ drug
5 ‘I’m sleeping with my ex-boyfriend and want him back – but don’t want to scare him off’
Real news has value SUBSCRIBE