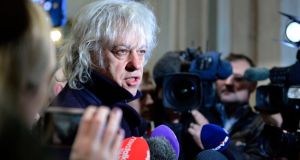 Sir, – I’ve long been an admirer of Bob Geldof and his direct approach to calling out injustice. However, his naive action in handing back the freedom of the city of Dublin shows a very limited understanding of the political situation in Myanmar. If he genuinely believes that a woman of Suu Kyi’s education and intelligence supports ethnic cleansing or the anti-Muslim activities undertaken by the Myanmar military, he is incredibly misguided.

Though Aung San Suu Kyi has been the de facto head of Myanmar’s civilian government, she is limited in her control of the country by a constitution written by the military junta that has ruled Myanmar for decades. The military is in charge of the operations in northern Rakhine, and ending them is not up to Ms Suu Kyi. Her release was a bid to engender positive global relationships and enable greater trading and interface by a cynical government that still firmly holds control. Attempting to drag her country into the 21st century after 60 years of repression, economically, politically and socially, while preserving this fragile democracy, remains her primary consideration, and it is clear that her voicing opposition to the military for their actions against the Rohingya can only jeopardise these wider aims.

Uninformed tub-thumping is unhelpful and frankly pitifully ineffective. Efforts would be much better placed in condemning the Buddhist monk Ashin Wirathu and his party Ma Ba Tha, which contrary to all Buddhist edicts of peaceful coexistence, continue to stoke up hatred against the Muslim community with the full backing of the Myanmar military.

We have all been disappointed by Aung San Suu Kyi’s lack of condemnation but to suggest that she “shames democracy” reveals an intrinsic lack of knowledge about the history of this country and a shameful capitulation of her incalculable achievements – indeed sacrifices – made for her country and people, Rohingya and Buddhist alike. – Yours, etc,

Sir, – Does this mean that we can shortly expect “Saint Bob” to hand back his honorary canonisation? – Yours, etc,

Sir, – In response to the persecution of the Rohingya community in Myanmar, Bob Geldof is to return his freedom of Dublin award.

Will he also return his honorary knighthood in protest at the countless deaths through famine and violence in Yemen, caused by arms sold by the British state to Saudi Arabia? – Yours, etc,

Sir, – Bob Geldof is to hand back his freedom of the city of Dublin because the award is also held by Myanmar leader Aung San Suu Kyi. In view of this chivalrous act, maybe he might reconsider his knighthood in view of the many unsavoury characters who hold similar titles? – Yours, etc,

1 Anti-Irish bigotry in Britain has not gone away
2 Steve Coogan: ‘Come Out, Ye Black and Tans is two fingers to the British’
3 Coronavirus: Almost 60 new cases recorded in Italy as two die
4 Dancing With The Stars backstage: ‘I’d love to see Danny Healy Rae out there’
5 Archbishop: Sex abuse of women by L’Arche founder ‘reprehensible’
Real news has value SUBSCRIBE