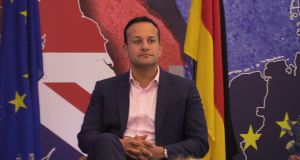 Boris Johnson says the backstop Theresa May negotiated with the EU has to go, while the pro-Brexit ranks of ministers, backbenchers and press can’t decide whether Ireland’s leader is a bluffer, an EU stooge, or a tin-pot hardman drunk on power.

What none of them has considered is the obvious truth: in a time when faith in politicians is collapsing in the UK, the rumblings, mumblings and bumblings of Brexit have strengthened Varadkar’s political position to a degree they can’t comprehend.

This is the gift that has fallen into Varadkar’s lap: to be 'forced' into pursuing a common-sense policy that is in his country’s interests

It’s important to understand at the outset that Varadkar isn’t overwhelmingly popular at home. His government is a tenuous coalition of parties that would ordinarily be at each other’s throats. They have been criticised for their handling of Ireland’s mounting housing crisis, and numerous scandals regarding the incompetence of key ministries, not least the drawn-out saga over the exploding cost of a new national children’s hospital.

British readers may find it charming, even nostalgic, to read that the news in Ireland still contains stories about actual policy – rather than a never-ending autopsy of the government’s decision to engage in three years of colossal self-harm.

Even those who share his political viewpoints – a centre-right mix of mild social progressivism and pro-business neoliberalism – aren’t necessarily excited by Varadkar as a leader. He is regarded as wishy-washy and quite boring – the rare example of being both wet and dry.

This is a man who fondly described his first visit to Downing Street in terms of how much it reminded him of a scene from Love Actually. There’s a gormlessness to him that is sometimes endearing, but more often mortifying. Varadkar probably claps when his plane lands, and would absolutely crack up if you handed him a Big Mouth Billy Bass.

So how come he stands now before the British, viewed by many as this stoic and dignified statesman? Well, imagine, without smiling ear-to-ear at the very thought, that your job performance was measured on your ability to appear more statesmanlike and consistent than Johnson; more clear and definitive than May; or more truthful and probing than Nigel Farage.

Just saying the same thing two days in a row would put you in a handsome lead, even before we get on to the specifics of what is said. Ireland is not just mammothly pro-European, and deeply invested in the Northern Irish peace process, it is aghast at the cohort of nonsensical charlatans that have seized power in Britain.

Johnson and his new administration haven’t fully realised just how vile they appear to the rest of the world – and Ireland especially. They are, in short, acting like a pantomime version of the Etonian imperialists Irish people have sung rebel songs about for centuries: a prime minister, who in his time as foreign secretary is said to have asked why Varadkar, a man of Indian heritage, isn’t “called Murphy like all the rest of them”; a foreign secretary who just threatened Northern Ireland with direct rule mere days into the job.

Standing up to this is not just strategically essential for Varadkar, it’s as close to a no-risk gambit as exists in modern domestic politics.

It also speaks to the mania of Brexiters that they are convinced that the EU is somehow forcing Varadkar into this position, as if it isn’t massively politically expedient for him at home, or that Ireland would secretly love to destabilise the peace process and erect a 300-mile border apparatus just so Britain can destroy its own economy, except their pesky European overlords won’t let them.

This is the gift that has fallen into Varadkar’s lap: to be “forced” into pursuing a common-sense policy that is in his country’s interests, against the least likable political opponents possible.

To be blunt, Varadkar only looks like a statesman because the British government are acting like spoilt, xenophobic children. Not that this appears to be sinking in at Brexit HQ. On Monday the former Sun editor David Yelland tweeted that the mood was bullish.

“I’ve been shocked at two dinners recently,” he wrote, “when Tories of influence have told me privately ‘Varadkar isn’t bright’ and ‘the Irish will blink’ and it seems, amazingly, that this is the actual policy of HMG under Johnson. They are anti-Irish, arrogant, dangerous and wrong.”

While one might question a Sun editor’s capacity for self-reflection when it comes to peddling delusions about foreigners, his account confirms what many of us have long guessed.

The British establishment either a) genuinely believes that Varadkar will suffer for his common-sense objections to catastrophic political vandalism on Ireland’s doorstep, or b) is content to peddle this confected bollocks to appease an audience it has kept systematically uninformed, until it simply runs out of road.

It now appears to be British policy that Ireland will, at some point, balk at the UK’s threat of destroying itself in front of them. Whether they realise it or not, this amounts to the hope that Ireland cares more about Britain’s wellbeing than the British government does. Considering the venal cabal of disconnected toffs in power, on that last point they may be right.

Unfortunately, Ireland is not the sassy friend in a sitcom written by the UK, some steadfast pal who exists only to selflessly further British ambitions. Varadkar is no Caesar, and his current vogue is less to do with canny statecraft than the fortune of happenstance.

He looks like an adult because the UK is acting like a toddler to whom he must explain that other countries continue to exist, even when they close their eyes. For their own sake, they should open them soon.

Séamas O’Reilly is a writer from Derry
– Guardian Service