Pat Leahy: The big parties’ re-emergent rivalry can end only in a general election 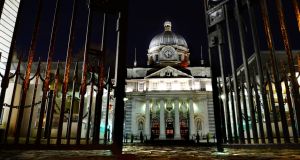 Confidence-and-supply frenemies: the growing chasm between Fine Gael and Fianna Fáil is driven by the North and Brexit. Photograph: Cyril Byrne

The collapse of the consensus on Northern Ireland between Fine Gael and Fianna Fáil is significant in itself, but it is only part of a wider deterioration of relations. It has only one possible end point: a general election.

The growing chasm between the two parties is driven by policy and political differences on the North and on Brexit, as well as by domestic policy issues that are less sharp but exaggerated to create political distance between the governing party and its confidence-and-supply frenemy. It is exacerbated by Fine Gael’s neglect of confidence and supply on the one hand and Fianna Fáil’s frustration with being in Opposition on the other.

But it’s also driven by fear in Fianna Fáil that Fine Gael is using the levers of Government to advance its political interests. Fianna Fáil is afraid of this precisely because it understands the process so well, and how politically and electorally effective it can be, at least in the short term. For all that the two parties are divided by culture and history (and occasionally by policy), they understand politics well. Nobody knows their rivalry better than they do themselves.

Sinn Féin understands it more and more, though, and the party is learning how to push the buttons of both of its rivals.

So Pearse Doherty, in the Dáil on Thursday, did not, as Micheál Martin had done, criticise the Government for its lack of engagement and understanding on the North. Rather he praised Simon Coveney, and lashed Fianna Fáil for its criticisms. Coveney was sharp and cutting in response, saying Martin didn’t understand what was going on in Northern Ireland. For a Fine Gael Tánaiste to say this about a Fianna Fáil leader is like one Mafioso insulting another’s mother.

The opening of the North as a point of political contention between the two big parties in the Dáil is something we have not seen for many years: it shatters a convention that has been largely observed since the 1990s. Martin has been privately critical of the Government’s approach to the North for a long time. But he has been relatively restrained in public, preferring to make his points to the Government during the more gentlemanly (and informative) atmosphere of Taoiseach’s oral questions in the Dáil rather than the bear pit of the televised Leaders’ Questions, where the objective is to score points and get a clip on the evening news.

Martin believes, frankly, that Leo Varadkar’s Government has made a mess of the North. He also believed that Enda Kenny’s government began that process. Martin is certainly right that the Fine Gael-led Governments have been less engaged in Northern affairs than their Fianna Fáil predecessors. The step back was a deliberate decision, made with David Cameron’s Conservative governments, for which the North not so much fell down the agenda as fell off it altogether.

Cameron cared about Anglo-Irish relations, certainly, instituting an annual summit and intensive Civil Service co-operation. But the North was a diminishing part of that. The view was: time to let them stand on their own two feet. Let them get on with it. That outlook was largely shared politically in Dublin, too.

The locus of Sinn Féin’s principal political ambitions is now Dublin. That decision was made a long time ago, and everything that the party has done since – organisationally; policywise; in terms of moving key personnel, including Gerry Adams himself, south; and in grooming and selecting Mary Lou McDonald – has been directed towards that end. That doesn’t mean Stormont is not important to Sinn Féin, but it’s not the most important thing. It is now subject to the bigger priority of progress in the South.

The extent to which coaxing the DUP back into powersharing is secondary for Sinn Féin was captured perfectly by McDonald’s speech at her ardfheis coronation at the RDS last weekend. If Sinn Féin was primarily concerned with helping Arlene Foster to bring her party back into Stormont then McDonald wouldn’t have rounded off her peroration with that rousing “Tiocfaidh ár lá!”

Never mind that it was unscripted; it wasn’t accidental. That is not the way these things work. It was evidence that, for the new leader, reassuring the republican base, especially in a time of change, trumps reassuring the DUP. In that respect she is carrying on the work of her predecessor.

But Stormont is no longer the principal focus for the DUP, either. Westminster arithmetic has propelled the DUP MPs – always an alternative power in the party – centre stage. With the sort of limited foresight that has often characterised the party’s approach to politics, its leadership – in the broadest sense – finds it difficult to see past its current position of power and influence in Westminster. This is inevitably short-sighted. Charming and all as Nigel Dodds and the lads may be as dinner-party guests, I fear the invites might dry up once the Commons numbers change. But then lots of politics is short-sighted.

The constants of democratic politics everywhere are dealmaking and competition. The deal between Fianna Fáil and Fine Gael is slowly unravelling. The deal in the North was never done in the first place. In both cases acute political competition is the reason. It’s hard to see how the public interest is served by any of it.